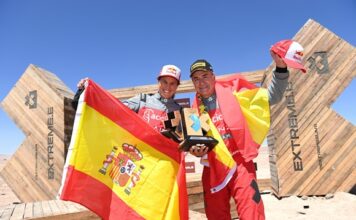 The ACCIONA | SAINZ XE Team has proven to be one of the most consistent driver pairings in Extreme E, with the Spanish duo of Carlos Sainz Snr. and Laia Sanz appearing in all four Finals so far this season.

Sanz, in particular, has produced some standout performances, which is all the more remarkable considering it is only her second campaign competing on four wheels. We caught up with Sanz after claiming second place at the Antofagasta Minerals Copper X Prix in Chile to discuss her impact in Season 2 and ACCIONA | SAINZ XE Team’s title chances heading into the finale in Uruguay.

Extreme E: How would you sum up your performance in Chile?
Laia Sanz: Chile was really nice. It was the race where I felt the fastest so far and I think it was a good result. It was really good to be back on the podium and I think the team really deserved that.

It was a pity, though, because I believe we could have done even more. A second place sometimes is a great result, but when you know it could have been better then it is not perfect. Still, we can be really proud of what we did in Chile and I am happy for the team and for having the championship a little bit open for the final race, even if it still is really difficult.

XE: How would you compare your speed and experience in the car to when you first debuted for ACCIONA | SAINZ XE Team?
LS: There is a big difference. I am still the driver in four wheels with less experience, but last year when I started in Extreme E it was a completely new thing for me. I was struggling a bit in the first races because the level was so high. The races are short so you don’t get much seat time, but I think I’ve used it really well and I have learnt a lot.

I already feel a change mentally, because when you get better you gain confidence and you know you can perform. This gives me a lot of positivity and I am enjoying it much more than last season.

XE: What do you think is the main reason for your performances in the ODYSSEY 21 now compared to last year, and how challenging is it on four wheels compared to two which you have previously been renowned for?
LS: Last year there was already a big improvement, because I was the fastest girl in practice in Dorset. I wasn’t as fast in the race because it was still my weakest point, but this year I’ve performed well in Saudi Arabia and in Sardinia.

I am getting more confident and I think the secret is being close to Carlos [Sainz Snr.], because he is a legend. He knows that I can learn a lot and I try to pay attention and listen to his advice. I think that’s the secret. I’ve changed sports throughout my career and I’ve always learnt from it.

I like doing new things and it’s easier when you are as motivated and passionate as I am. Having Carlos by my side is helping me a lot. Spending time with him is like a masterclass. He is the best teacher I could have.

XE: You were the fastest female driver in large parts of the weekend in Chile. What did you enjoy especially about the Chilean course?
LS: I didn’t really expect to be that fast in Chile. I was good in Saudi Arabia, but I was coming from Dakar and it was a similar terrain. However, Chile was something quite different. It was more rallycross style and I didn’t expect to be that fast because there are a lot of great rallycross drivers in Extreme E.

I did a couple rallycross races myself earlier this season, so maybe it helped. It was something unexpected, but I was happy about that weekend.

Overall, the weekend in Chile was just really good. I felt comfortable, which is the most important thing. I am also really happy because I can really help the team this year – there is still a big margin to improve but I feel I am improving in every area. Last season I was struggling and sometimes I felt bad for Carlos and the guys, but this year I do notice that I am helping the team and it makes me feel really proud.

XE: Lastly, you have faint title hopes going into Uruguay, but finishing within the Top 3 is definitely within your grasp. How would you sum up the year overall and are you excited for Uruguay?
LS: We are happy of course. We still have an outside shot at the title in Uruguay, although we know it’s very difficult. Still, we can feel really proud about what we have done this season. I feel it could be very different had we not had the accident in the NEOM Island X Prix I, because perhaps we could have won that race and then maybe everything would have changed. Maybe it would have put much more pressure on the championship and it would have been a better fight until the end. However, that’s racing – we will still try our best and that’s the main thing.

Our rhythm is much better than last year and we are really competitive in every race. We have been to every Final, which is such a milestone and something we’re very proud of. I don’t know what the final result will be, but we will give our best and see what happens.

You can follow ACCIONA | SAINZ XE Team’s bid for the Extreme E Season 2 title at the final round of the championship in Punta del Este, Uruguay, on 26-27 November.