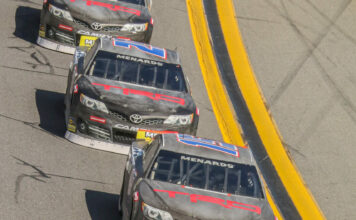 It was fast cars and Hollywood stars in the annual ARCA Menards Series pre-season pre-race practice at Daytona International Speedway which concluded on Saturday. The two days of on-track activity saw 61 drivers and 37 different cars on the racetrack.

The Venturini Motorsports team led the way, sweeping the top four positions on the leaderboard with female drivers Toni Breidinger and Amber Balcaen the fastest, with their teammates Jesse Love and Gus Dean in third and fourth respectively. Venturini Motorsports has won six consecutive races at Daytona, five on the 2.5-mile tri-oval and one on the road course with drivers Michael Self, Harrison Burton, and Corey Heim. It’s the third time VMS has led the pre-race practice results with a female driver; the team previously showed the way with drivers Natalie Decker and Leilani Munter, but it’s the first time in history the top two positions were held by women.

Love, a two-time ARCA Menards Series West champion, led the full-time drivers in third place, timing in at 49.129 seconds/183.191 miles per hour. Love, who turned 18 on Friday, announced his intention to compete for the series championship in 2023 driving the No. 20 Toyota.

Emmy nominated actor Frankie Muniz announced earlier in the week his intention to compete in the full 2023 ARCA Menards Series and backed up that announcement with a solid performance on the track over the course of the two days. Driving the No. 30 Ford for Rette Jones Racing, Muniz quickly acclimated to the draft, turning in the tenth-fastest lap of the weekend at 49.403 seconds/182.175 miles per hour.

Rev Racing’s new lineup of drivers – Lavar Scott and Mexico’s Andres Perez de Lara – was supplemented by defending series champion Nick Sanchez, who helped guide the two young drivers as they made their first laps at Daytona. Perez de Lara, who timed in 18th fastest at 49.891 seconds/180.393 miles per hour – will be competing for the series championship in 2023, while Scott will be competing in a limited ARCA Menards Series schedule while he competes for the championship in the ARCA Menards Series East.

Joe Gibbs Racing’s lineup, Connor Mosack and William Sawalich, were both fast over the course of the two days. Sawalich, who will run 20 races on short tracks and road courses spread across the ARCA Menards Series platform, was fifth overall while Mosack, who will run a limited schedule on superspeedways, was 14th overall.

Other drivers who have announced their plans to compete for the ARCA Menards Series championship at the pre-race practice included Greg Van Alst, who was 15th overall, and Christian Rose, who has made the move to AM Racing, who was 30th overall.

The ARCA Menards Series season starts Saturday, February 18 with the 60th running of the Daytona ARCA 200, which will be televised live on FS1 starting at 1:30 pm ET. For complete series information, please visit ARCARacing.com and for up-to-the-minute updates follow @ARCA_Racing on Twitter.