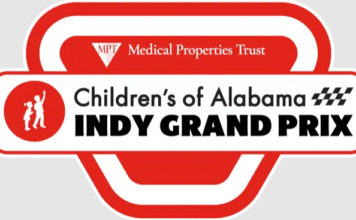 Medical Properties Trust, a Birmingham-based real estate investment trust specializing in the acquisition and development of net-leased hospital facilities around the world, has entered into a five-year sponsorship agreement for the naming rights of the event and has dedicated the entitlement to Children’s of Alabama. A percentage of proceeds from ticket sales and additional ancillary events will benefit Children’s of Alabama.

Children’s of Alabama is ranked among the best children’s hospitals by U.S. News & World Report. Children’s serves patients from every county in Alabama and is one of the ten busiest pediatric hospitals in the United States.

The three-day racing event will take place April 28 – 30, featuring the NTT INDYCAR SERIES. In its 13th year, the event is hosted at the world-renowned Barber Motorsports Park, home of the Barber Vintage Motorsports Museum. This year’s event, April 28 – 30, kicks off the Month of May leading into the Greatest Spectacle in Racing, the Indianapolis 500. Tickets are on sale now at indyalabama.com, with General Admission tickets starting at $25. Kids 15 and under are admitted free with a ticketed adult.

“We are incredibly excited about this agreement with Medical Properties Trust. It marks a new era for this event,” said Gene Hallman, CEO of ZOOM Motorsports, the exclusive promotor of Barber Motorsports Park. “We thank Medical Properties Trust for their partnership which will allow the event to be the first NTT INDYCAR SERIES race to partner with a non-profit for the naming rights to a race.”

“Since the first race in 2010, the growth of the NTT INDYCAR SERIES in Alabama has been remarkable,” said INDYCAR President Jay Frye. “It is tremendous to see Medical Properties Trust partner with Barber Motorsports Park to expand on its Racing for Children’s program. Barber Motorsports Park has a tradition of producing great racing and exciting partnerships and we look forward to seeing both continue for years to come.”

Honda will continue their long-standing partnership with the event as the official automobile partner.

About Children’s of Alabama Indy Grand Prix
In its 13th year, the Children’s of Alabama Indy Grand Prix is a signature event on the NTT INDYCAR SERIES circuit. This year’s event will feature ten races over three days with drivers such as Will Power, Romain Grosjean, Scott Dixon and Alex Palou at the world-renowned Barber Motorsports Park from April 28 – 30. The event generates more than $20 million in economic impact annually, with tickets sold in 50 states and 8 countries. The race is broadcast by NBC nationally and internationally to more than 100 countries. Additional events include wine tastings, an art festival, INDY 5K, Fan Zone and more. For more information, please visit indyalabama.com.

About Children’s of Alabama
Since 1911, Children’s of Alabama has provided specialized medical care for ill and injured children, offering inpatient, outpatient and primary care throughout Central Alabama. Ranked among the best children’s hospitals in the nation by U.S. News & World Report, Children’s serves patients from every county in Alabama and nearly every state. Children’s is a private, not-for-profit medical center that serves as the teaching hospital for the University of Alabama at Birmingham (UAB) pediatric medicine, surgery, psychiatry, research and residency programs. The medical staff consists of UAB faculty and Children’s full-time physicians, as well as private practicing community physicians.

About Medical Properties Trust
Medical Properties Trust is a self-advised real estate investment trust formed in 2003 to acquire and develop net-leased hospital facilities. From its inception in Birmingham, Alabama, the Company has grown to become one of the world’s largest owners of hospitals in ten countries across four continents. MPT’s financing model facilitates acquisitions, recapitalizations and allows operators of hospitals to unlock the value of their real estate assets to fund facility improvements, technology upgrades and other investments in operations. For more information, please visit the Company’s website at www.medicalpropertiestrust.com