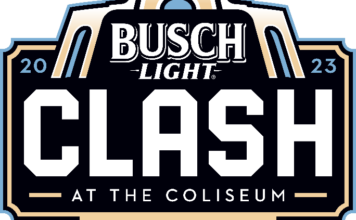 LOS ANGELES (Jan. 22, 2023) – USC quarterback Caleb Williams amassed a highlight reel of amazing plays inside the Los Angeles Memorial Coliseum in 2022. His first Coliseum highlight of 2023 will be waving the green flag for NASCAR’s first race of its 75th anniversary season.

The 2022 Heisman Trophy winner has been named the Honorary Starter for the Busch Light Clash at the Coliseum on Sunday, Feb. 5. He’s the latest addition to a star-studded event that includes racing from the top drivers and cars of the NASCAR Cup Series, and performances by hip hop icons Cypress Hill and Wiz Khalifa.

In December, Williams became the eighth player in USC’s storied history to win the Heisman Trophy. He led the nation with 42 touchdown passes and threw for 4,537 yards for a team that won 11 games. Moreover, Williams’ elusiveness made him a threat on the run, as he rushed for 442 yards and six TDs, while also creating opportunities for his teammates as he scrambled out of the pocket.

Now Williams will create the memory of a lifetime participating in NASCAR’s highly anticipated return to the LA Memorial Coliseum.

The sanctioning body announced earlier this month that 27 cars will compete in the 150-lap Clash main event. Up to 40 NASCAR Cup Series drivers will attempt to qualify for that main event via four heat races and two last-chance qualifiers that will determine the final field of 27.

And then shortly after 5 p.m. PT, Williams will wave the green flag for the main event, which features a special mid-race performance by Wiz Khalifa.

Tickets for the 2023 Busch Light Clash at the Coliseum begin at $65, and kids 12-and-under are $10. Fans who want to take their race-day experience to the next level can upgrade to the Ally Pre-Race Party, which includes brunch, a drink ticket for Busch & Coca-Cola products, exclusive entertainment, a pre-race track walk and a special appearance from driver Alex Bowman. Fans are encouraged to get their tickets now while supplies last by visiting www.nascarclash.com. It’s one of the many anticipated events taking place this year as a part of the venue’s centennial anniversary celebration – “Coliseum Forever.”

College students can experience the Busch Light Clash from The Coca-Cola Torch Party Porch for just $40. This standing-room-only general admission section, located on the Coliseum’s peristyle steps, provides college students with up-close access to all the musical entertainment, driver introductions and racing action. College students can take advantage of this exclusive offer by visiting www.nascarclash.com/student.

The Los Angeles Memorial Coliseum, a living memorial to all who served in the U.S. Armed Forces during World War I, has been a civic treasure for generations of Angelenos. Located in the Exposition Park neighborhood of Los Angeles, CA, the Coliseum is a 77,500 capacity multi-purpose stadium which opened in 1923. Home to the USC Trojans, the legendary stadium has been named as one of the nation’s 40 best stadiums to experience college football by Sporting News, and ranked USC football at the Coliseum as the nation’s No. 3 stadium experience by StadiumJourney.com. Following a recent renovation in 2019, the stadium is now home to a newly added seven-story suite and press tower which includes luxurious suites, loge boxes, club seats, a new press box, and the rooftop 1923 Club with a 360-degree view of the Los Angeles basin; along with several upgrades including new seating, updated technology and concession stands, additional food options for guests, and much more.

The legacy of events and individuals hosted in nine-plus-decades reads like no other, including the only venue to host two Opening and Closing Ceremonies, and the Track and Field Competition for the Summer Olympics (Xth Olympiad in 1932, XXIIIrd Olympiad in 1984) and soon a third (XXXIVth Olympiad in 2028); home to college football’s USC Trojans since 1923 and the UCLA Bruins (1928-1981); professional football’s Los Angeles Rams (1946-1979 and 2016-2019); appearances by U.S. Presidents Franklin D Roosevelt, Dwight Eisenhower, John F. Kennedy, Lyndon Johnson, Richard Nixon, and Ronald Reagan; and international dignitaries such as Martin Luther King, Jr., Cesar Chavez, Pope John Paul II, the Dalai Lama, and Nelson Mandela, to name a few. Additionally, the Coliseum, designated a National Historic monument in 1984, has hosted some of the greatest acts in entertainment, including Bruce Springsteen, The Rolling Stones, Pink Floyd, Prince, and many more. For more information please visit lacoliseum.com.