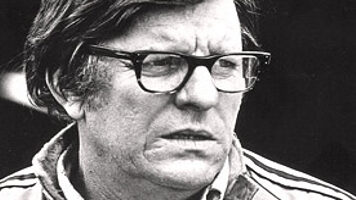 Bud Moore was recently announced as an inductee into the second class of the NASCAR Hall of Fame.

His reaction was poignant.

“I’m really thrilled,” Moore said. “You just don’t know how thrilled I really am to be chosen. It is one of the greatest moments of my life.”

However, on a day intended to honor and celebrate his life’s work, controversy reared its ugly head. There are those who question his inclusion over more well-known names such as drivers Darrell Waltrip and Cale Yarborough.

There is no standardized template for the perfect Hall of Fame candidate. It’s not as simple as comparing statistics to determine who comes out on top. Each individual’s contributions, both on and off the track, must be considered. For often indefinable reasons, there are always those special few who shape the sport for future generations.

Bud Moore is one such man.

Walter M. “Bud” Moore was born on May 25, 1925, in Spartanburg, South Carolina and once described himself as “an old country mechanic who loved to make ‘em run fast.”

As a young man, he was drafted into the Army and went off to serve his country as an infantryman. Moore returned from World War II as a highly decorated hero with two Bronze Stars and five Purple Hearts.

He showed that same level of commitment and focus when he began his racing career and was a prominent figure in the early days of NASCAR. When you talk about the founding fathers of NASCAR, you’re talking about Bud Moore.

Moore was the crew chief for Buck Baker when Baker won the championship in 1957. He won back to back championships as a car owner with Joe Weatherly in 1962 and 1963. Moore also won a Grand American championship in 1968 with Tiny Lund and a Sports Car Club of America Trans-Am title in 1970 with Parnelli Jones.

If you take a look at the biggest names in NASCAR history, it’s hard to find anyone who hasn’t driven a Bud Moore car.

“The thing is, a lot of people ask me, who was the best? They all were good,” Moore once said. “Some were better on some racetracks and others were better on others.”

“Buddy Baker was the best on mile-and-a-half, two-mile racetracks. Bobby Allison was good on all the racetracks, and Dale Earnhardt was just as good, or better.”

“But those (last) two stand out to me, as far as being drivers on all the tracks. But I can’t pick a favorite. I liked them all.”

Bud Moore cars have also won at some of NASCAR’s most prestigious tracks.

Darel Dieringer won the Darlington Southern 500 in 1966. Buddy Baker won three straight races at Talladega in 1975 and 1976 in Moore owned cars. Bobby Allison won the Daytona 500 and the National 500 at Charlotte Motor Speedway in 1978.

Bud Moore’s retirement tells a familiar story of talent versus money. After problems finding sponsors, he finally closed his shop and retired from racing in 1999.

“I spent a bunch of my own money keeping the team alive, keeping the shop and keeping key personnel on board,” Moore said. “Whenever we thought we had a sponsor deal, somebody would say to them, ‘Wait a minute. Why in the world would you spend millions on Bud Moore? We’ll put you on four or five cars for a million.’ If that was you, what would you do? You’d go on four or five cars. So that put us out of business. From 1994 to 1999, there were 23 single-car teams that went out of business.”

Bud Moore may not have been the popular choice for the NASCAR Hall of Fame but that doesn’t mean that he isn’t the right choice.

If you don’t believe me, maybe you’ll believe Dale Earnhardt.

“He can do more things with a car than anyone I’ve ever seen. I’ll put it this way, he’s the best I’ve ever seen, and that includes Fireball Roberts and guys like that.”

When Earnhardt heard what Moore had said, he responded by saying, “It takes more than a driver. You have to have a good team and they’re hard to come by.”

He went on to say, “I’m glad Bud feels that way. I can also say, I think he’s the best. It’s an honor coming from him considering what he’s seen and the drivers he has seen go by.”

Angela Campbell
A native of Charlotte, NC, Angela (Angie) was first introduced to racing by her father. An avid fan of NASCAR, she found a way to combine her love of racing with her passion for writing. Angie is also an award-winning member of the National Motorsports Press Association. Follow her on Twitter @angiecampbell_ for the latest NASCAR news and feature stories.
Previous articleRon Hornaday Advance: Martinsville Speedway Advance
Next articlePatrick Sheltra Looks for Nationwide Opportunity

A.J. Allmendinger, driving his No. 16 Kaulig Racing Chevrolet, took advantage of a late-stage caution to get the lead and stay there taking the checkered flag.
Read more