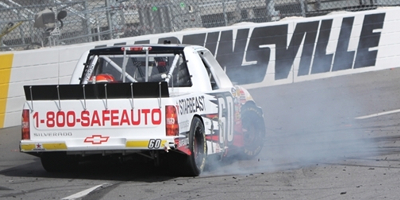 For the first time in nearly a month, NASCAR’s Camping World Truck Series returns to action on the very venue that made the series famous to begin with: a short track. Saturday’s Kroger 200 at the Martinsville Speedway is expected to be a lively NASCAR style tailgate party when 36 full sized racing trucks line up on this famous speedway’s half mile, paper clip shaped, oval.

The significant news for the race winner of the Kroger 200 literally involves the time of day. For many years the winner of the two Sprint Cup events at the Martinsville received a beautiful, custom made, grandfather clock. For the first time ever speedway officials have decided to bestow that special honor to the winner of the NASCAR Camping World Series race winner. Everyone wants to be the first series driver to win this beautiful clock and it’s definitely going to be an added incentive within this race.

Keep a sharp eye on the #17 Red Horse Racing Toyota during Saturday’s race. Driver Timothy Peters, along with crew chief Jeff Hensley, will be on a major mission. They won their first ever series race at Martinsville last year and they’re definitely planning on a repeat. That first win last year was particularly special because of the hometown crowd element. Both Peters and Hensley are from Martinsville.

Keep an eye on a quartet of lady drivers who could possibly create some NASCAR history during Saturday’s truck race. Depending on how qualifying turns out, it could be the first time that four lady drivers starts a national NASCAR touring series event. Leading the group is Jennifer Jo Cobb. The driver of the #10 Ford will be making her 25th series start. In the process of trying to launch a national NASCAR career is Johanna Long, #20 Dodge, who hopes to make her fifth series start on Saturday.

Looking to make their series debut, and some additional NASCAR history, are Angela Cope, #01 Dodge, and Amber Cope, #6 Dodge. The Copes are hoping to become the first ever set of sisters to compete in a NASCAR national touring series. They will also be seeking major seat time while earning respect from the other drivers.

Also keep a sharp eye on series points leader Todd Bodine. With only five races left in the season, Bodine currently holds a 262 points lead in the championship standings over Aric Almirola. It appears that Bodine is well on his way to his second series championship.

But Bodine is involved is involved in another points battle that is still too close to call. That would be the series’ coveted owner’s championship. His owner of record, Steve Germain, is currently on top of the standings but it’s a rather slim lead of 39 points over Kyle Busch Motorsports. Kyle Busch has been driving his own truck when his Sprint Cup schedule allows it. This owner’s points championship will be getting rather interesting because Busch has announced plans to drive the #18 Toyota in the final five truck races of the season.

Also check out the different paint scheme for Bodine’s #30 Germain.Com Toyota during the Martinsville race. The truck will be loaded with pink paint in support of October being breast cancer awareness month.

The Kroger 200 is 200 laps around the Martinsville Speedway’s .526 mile oval. The fact that the speedway is shaped like a paper clip makes it even more challenging.

The race has 38 entries vying for the 36 starting berths.

14 of those entries are on the go or go home list meaning these teams are not guaranteed a starting berth because they are currently outside of the top 25 in owner’s points. These teams will have to rely on qualifying speeds to make the race.

There doesn’t seem to be any real dominance by any one truck team at Martinsville. 23 series races there has produced 19 different winners.

The Kroger 200 will be broadcast live by SPEED beginning at 1230 pm eastern time.