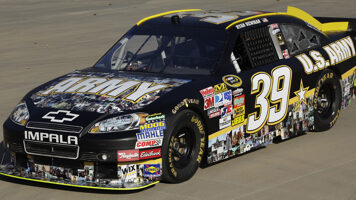 Ryan Newman, driver of the No. 39 US Army Chevrolet for Stewart Haas Racing, will be celebrating Veteran’s Day in a very unique way, displaying the faces of over 500 veterans on his race car at Phoenix this weekend.  This special paint scheme will serve as a reminder of the real faces behind the uniforms that have sacrificed so much for their country.

The Army also appreciates what Newman is doing through this special honor on his race car for the Kobalt Tools 500.  Newman will be making his 17th career start at Phoenix International Raceway in this weekend’s Cup race.

“Every time Ryan Newman drives the No. 39 Chevrolet with the Army colors, he represents the more than one million men and women who proudly serve our nation,” Col. Derik Crotts, Director of Strategic Communications, Marketing and Outreach, US Army, said.  “For this race, with this paint scheme, we pay tribute to our heroes past and present and their families.  Every picture, each face, is a reminder of the sacrifice and service of the millions who have made our Army strong and our nation free.”

The faces on Newman’s car also represents the various generations of veterans, men and women, who answered their country’s call, from World War I to the present day conflicts.  One veteran in particular, Luis Rodriguez Jr., will be attending the race as a guest of the US Army race team.

Rodriguez, who is 85 years old, is a World War II veteran and a resident of Sahuarita, Arizona, just 15 miles south of Tuscon.  He served in the Army as a member of the 118th GeneralHospital, based in New South Wales, Australia.

Newman advises that in this case, he was not involved in the selection process for the faces on the car, which was all handled by the Army.

“In this case, I’m just the driver,” Newman said.  “But I sure am honored to represent those people and those families.  It’s special to race on Veteran’s Day weekend and think about all those veterans who have given us this freedom we have through all forms and branches of our military.”

Newman is not only looking forward to racing with this special paint scheme on the car, but is also anxious to get back to Phoenix, which traditionally has been a good track for him.

“It is a good track for us,” Newman said.  “With two races left in the season and knowing that we’re coming back to the track where we won in the spring, there is excitement in that.”

Newman admits that at this time of year, with the season drawing to a close, the other main issue is maintaining the focus.  He also said the race will be different at Phoenix this weekend, which is a day race, compared to the night race he won earlier in the season.

“I’ll look forward to trying to get done what we did in the spring in the day,” Newman said.  “The victory gave us a huge lift when we needed one and hopefully the Phoenix track will give us the same lift again.”

While Newman acknowledges they are still wholly in the 2010 season, they are also looking toward how they will build on their success for 2011.

“It will be extremely important for us to come out of the box strong next season,” Newman said.  “We didn’t do that this season so that is something that is definitely on our minds to accomplish and make improvements on in 2011.”

In addition to racing with all of the veterans’ faces on his car, focusing on a repeat win at Phoenix, and getting ready for next season, Newman also has another important event on his mind.  He and his wife Krissie are expecting their first child, a girl, due Thanksgiving.

“Ron Hornaday is on standby for us,” Newman said.  “We have a lot of things going on.”

Newman plans to celebrate the actual Veteran’s Day by traveling, sans his wife who can no longer fly, to Phoenix for the race.  He will continue the honoring of veterans throughout the race weekend, especially the 500 plus veterans featured on his race car, and is looking forward to that.

“It doesn’t change the way I drive the car,” Newman said.  “What it does change is that, if and when we have that success, it is even more special.”

“I just want to say thank you,” Newman said.  “Thank you to the veterans for the sacrifices you have made in giving us what we love and what our families can appreciate.  We can never thank them enough.  Thank you.”

SM Staff
Previous articleCan Mike Ford Deliver the Knock Out Punch in the Final Two Rounds of the Chase?
Next articleHamilton Brings Back Greatness