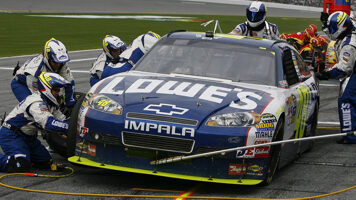 What’s wrong with NASCAR’s Sprint Cup Series? Some would say nothing. In fact, like the country we live in, many are willing to leave things as they are with no changes. Others, and I believe it’s the majority from what I have witnessed, think there should be changes. It’s a split decision between those who want to go back to the past and others who want to make changes for the future. [/media-credit]That’s where I come in. I think NASCAR’s top series can be fixed with a little common sense. For those who think that things are all perfect, might I remind you that attendance at the races has tumbled and television viewership keeps declining. If nothing is wrong, the sport will become the equivalent of Roller Derby in a few years.

Here are my humble suggestions:

1. Quit concentrating on the Chase Championship. We’re stuck with the Chase. The powers that be and many fans love it because it creates a playoff like baseball, football, and basketball. Funny that these stick and ball sports can relate to a series where winning the race used to be the ultimate. So we start counting points from Daytona to Richmond and the winner is an afterthought.

2. Do away with the Lucky Dog and the Wave-Around. I understand the logic in this. Racing back to the line to gain a lap was a dangerous situation in many cases, and having cars at the front of the field that are nearly a lap down is confusing, but it’s part of the tradition of the sport. It’s the same for racing to gain a lap. A great injustice has been done in going away from those traditions in the name of making things more exciting. Going back to the stick and ball sports, have the fathers of those sports gone away from the fundamentals to make things more exciting? No.

3. Change the All-Star race. Once upon a time, the race once known as …well many names was for those who won a race in the prior season. When multi-car teams became the rule, there weren’t enough winners to make out a field, I imagine, so they went to making the field larger by adding all kinds of rules so that more cars could compete. Then they added a “wild card,” just like the MLB and NFL to make more things interesting. The result has been a ho-hum event that just adds an extra weekend to Charlotte Motor Speedway. One year, Michael Waltrip won. He hadn’t won a race. How can a non-all –star participant win an all-star race? You tell me. The Bud Shootout at Daytona used to be the Busch Clash, made up of poll winners of the previous season. Someone figured out that there had to be more cars, so all kinds of rules had to be made up to make the field better. Change that, too. Let’s go back to the purity that made the sport special.

4. If we have to have a Chase, let’s forget about giving bonus points for wins because the usual suspects always get an advantage in this situation. It was a noble idea to reward drivers and teams for wins, but a system that allows a driver to jump several places for the final ten races based on wins, in a system based on consistency points is flawed. Of course, the crux of this opinion is my disdain for the Chase or playoff system. Change the points system to reflect winning as important is one thing, but manufacture an advantage within a consistency-based system is simply wrong.

5. Wake up and smell the coffee. The economy has been blamed for the attendance problems at tracks the last two years, but does that explain the drop in television viewership? No. And yet we get the same song and dance about the economy. It has a lot more to do with the genetic Car of Tomorrow and other issues mentioned here than the economy. Yes, the economy has had a part in the sport’s decline, but some of the things I’ve mentioned play a bigger part.

NASCAR rolled along with a good formula. Fans came, attended races, watched in record numbers on television for nearly 30 years. All of a sudden, someone somewhere decided that things needed to change. A car was designed for safety, mainly because of the death of Dale Earnhardt (which was Nobile and needed), and a championship system was based on a champion that only won one race during a season (Matt Kenseth). It was kind of a knee jerk reaction. Though the decline of the sport cannot be blamed on a couple of events, it all started there. As the solutions have been early and often, none of them have worked. So what do we do? I’ve laid out a plan that might or might not work. I don’t think it’s perfect, but it is an attempt to really address the problems, something I do not feel the sanctioning body has done, only trying to tweak a system that is not working, or least not bringing more fans to the sport. Discuss. And whatever happens, for the good of all, I hope someone figures out what should be done to stop the decline.

As of today, eliminations in the Chase and more bonuses for wins are not the answer. Holding on to flawed plans with tweaks is a recipe for more failures.

Ron Fleshmanhttp://www.ris-news.com
Ron Fleshman has followed NASCAR racing since attending his first race at Martinsville Speedway in 1964. He joined the Motor Sports Forum on the CompuServe network in the 1980s and became a reporter for Racing Information Systems in 1994. In 2002, he was named NASCAR Editor for RIS when it appeared on the World Wide Web as www.motorsportsforum.com. He can now be found at www.ris-news.com. Ron is a member of the American Auto Racing Writers and Broadcasters Association. You can find Ron following and reporting on the top three NASCAR divisions each week. As a lifer in his support of racing, he attends and reports on nearly 30 events a year and as a member of the motor sports media, his passion has been racing for 47 years. He lives with his family in rural West Virginia and works in the insurance industry when not on the road to another track.
Previous articleKasey Kahne: New Number, New Teammate, New Knees for the New Year
Next articleDaytona’s New Pavement gets 5 stars