Brad Keselowski Joins Darrell Waltrip and Denny Hamlin, As The Latest to Get Ensnared by Twitter 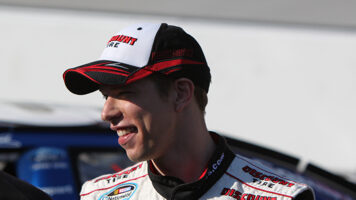 In today’s modern high tech era, the internet has made it easy for any fan to get up to date information which at one time was hard to come by.

Facebook and MySpace were two avenues the drivers and teams utilized to communicate with their fans, along with the many NASCAR websites such as Jayski, Scenedaily, and the independent websites which make up NASCAR’s Journalist Media Corps.

This past season, NASCAR took on a whole different look when Twitter joined the already sprawling social networking community.

Twitter became the backbone for many different reasons, and one of the biggest was to give the fans a glimpse of what goes on during a typical day in the life of their favorite driver.

The fans that flocked to Twitter were also given some good inside information on how each driver responds to different situations, which included members of the media who probably never realized just how many fans were actually tuned in.

The Twitter craze also gave members of the media and the fans a chance to interact with one another, because it was set-up as an instant messaging system allowing the participants the opportunity to chat with one another.

With any form of open messaging that is broadcast over the internet, there will always the downfalls which can quickly turn an average conversation into a costly mistake if the wrong information is broadcast.

Darrell Waltrip was one of those media members who learned the hard way, that social networking was a lot bigger than what he probably anticipated, when he leaked a story on his twitter page that drew National attention.

Waltrip posted on his twitter page, the details of Foxsports.com writer Lee Spencer’s article about Dale Earnhardt Jr. driving a No. 3 Wrangler Nationwide Series car at Daytona in July. [/media-credit]Denny Hamlin was another who made the same mistake, when he criticized NASCAR for throwing late caution flags to help make the June 13 race at Michigan more competitive on his twitter page.

Hamlin took it a step further when he tweeted about some late caution flags, which were thrown during the Nationwide Series race at Chicagoland Speedway July 9.

“Truthfully, I don’t think it matters to the fans who win the race as long as it’s a good ‘show,’ even if it comes as the expense of competition.”

Unlike Waltrip whose tweets came under attack from Earnhardt, “It’s unfortunate DW uncovered, and blew the lid off of it on Twitter no less. That kind of ruined our announcement that we had planned,” said an upset Earnhardt after Waltrip broke the story on Twitter.

Hamlin faced NASCAR who hit the driver of the No. 11 FedEx Toyota Camry, with a reported $50,000 fine.

“Other people before me, not to name names – Tony Stewart – have said way worse than what I have, way worse direct hits at somebody and got away with it.”

“I’ve always been raised to speak my mind and be, maybe, too over-opinionated at times,” said Hamlin after hearing about the penalty.

After these two unpleasant incidents, and these words of advice from Waltrip, “Lesson learned be careful what you tweet, because you never know who is reading. Oh by the way, I did learn one thing, Twitter is a great way to get the word out, even people that don’t have it know what’s on it.”

Brad Keselowski, became the next driver to inadvertently use Twitter as an avenue to talk about one of NASCAR’s rule changes for the 2011 Nationwide Series, and beyond.

Even though NASCAR hasn’t made any formal announcement, thanks to Keselowski displeasure at not being eligible for the Bud shootout, we now know that cup drivers will not be allowed to race for the NNS championship, which was one of the rule changes a lot of the fans were hoping for.

Keselowski said on his Twitter account Friday that, “Needed a good laugh tonight after being ruled ineligible for both shootout and NW championship in one loooong week. Thanks for the support.”

If there was one question that was answered through Keselowski’s blunder and that is the teams, and drivers know beforehand of any rule changes to the series before the fans and media are informed.

Whether or not Keselowski is telling the truth with this tweet on Saturday, remains to be known until NASCAR makes an official announcement.

“To clarify last nights remarks about NW championship No I have not been notified by anyone at NASCAR about the 2011 rules for eligibility.”

The only question remaining is, will Keselowski be willing to post on his twitter page if NASCAR decides to fine him for leaking the rule change?