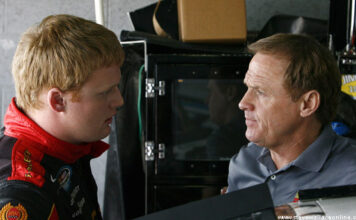 Folks, the headline may be hard to believe—but it is true. Well, okay, most of you would believe the second half of the headline, but not the first half.

As reported by Fox Sports on Saturday, Sam Hornish Jr. will not be racing anything in the Cup Series for Penske Racing or anybody come Daytona or during the year.

His crew has been shrunk to either join the Nationwide teams or strengthen Brad Keselowski’s Cup team.

This would equal no surprise, as Hornish hasn’t done anything in Cup except cause wrecks and incidents that have many people questioning why he was even in the series to begin with. Let’s face it—in 108 starts, he only has two top fives and eight top 10s. If you can’t get it done in that time, then how much time do you want?

NASCAR is a performance-driven business, and if you can’t get it done, you’re cut. Just ask Scott Speed, as he was booted from Red Bull Racing despite “contract terms” and “discussions” when he finished outside the top 20 in points.

Hornish has only lasted as long as he has with Penske due to their IZOD IndyCar success, as Hornish won 19 races, had 62 top fives and 80 top 10s in 116 starts. It’s the situation of being the teacher’s pet, but the teacher has run out of excuses to keep the principal from intervening.

So what happens in NASCAR when you don’t do well? Simple—you go down and run one of the two lower divisions, or you face the music and leave the series. Some drivers who have stepped down have found success and have loved it there—namely Ron Hornaday and Todd Bodine. The Camping World Truck Series has become home to drivers with this scenario and now has fans tuned in for the high-octane drama.

However, Dario Franchitti also faced the music but went back to IZOD IndyCar instead after his NASCAR experiment failed and won the championship. Some drivers are only fit for one form of motorsports, while others can adapt across the board, like Tony Stewart.

Hornish has taken the road of going down to the Nationwide Series for 2011, as he will run at least 10 races for Roger Penske, including the season opener at Daytona. Hornish will have no excuses for those 10 races, as Penske had two cars in the top five last year in points, so we know they have a good program. It’ll all be up to the driver and for him to prove that he belongs in NASCAR.

The second half of the story, though, is where the shocker hits—the owner’s points from the No. 77 car that Hornish drove will be used by Steven Wallace for the season-opening Daytona 500. With the No. 77 being 30th in points, therefore in the top 35, that will lock Steven into the race. What is wrong with this picture?

EVERYTHING ABOUT IT! Steven has yet to even find success in the Nationwide Series and has caused too many wrecks to count. Many fans have already expressed their thoughts towards Rusty Wallace in telling him to take his son out of the car and put his money in someone who can drive, such as his niece Chrissy Wallace.

His stats speak towards what the fans are saying, as in 157 starts he only has four top fives and 29 top 10s. He also has seven DNFs in his past 12 Nationwide Series restrictor plate starts. Now, we’ll be nice and say that he has been improving each year, yet not enough that it warrants him being allowed to run the biggest race of the year in the top series.

Rusty also said that he thinks Steven will be the Sprint Cup Series champion in 2015—delusional much? Doesn’t he see what we see in the fact that Steven can’t even call himself a top Nationwide Series driver?

Folks, last year’s Daytona 500 was almost ruined in the headlines by a pothole. Luckily, Jamie McMurray won it in emotional fashion and stole the headlines.

With Wallace starting this year’s Daytona 500 and the harm that he could cause, we may need another dramatic win to steal the headlines. Without it, we could see a lot of hate mail floating across the web over another ruined Daytona 500.

Penske Racing has obviously made some interesting choices since the conclusion of 2010 with choosing to attempt to find Hornish sponsorship rather than Justin Allgaier and now allowing a wrecking ball to run the biggest race of the year. Thankfully, there are people like Steve Turner who help those in need (Allgaier), and hopefully somebody like him will save us from doom in the Daytona 500.