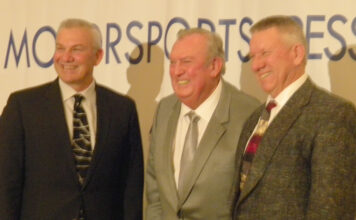 Father Ned Jarrett gave the induction speech for his son Dale.  He noted how proud he was that his son had followed in his footsteps not only in his racing career but now in his broadcasting career as well.

“We truly have been blessed in our careers, both Dale and I, to have been able to share a lot of good things together along the way,” Jarrett said.  “For him to follow in my footsteps as a driver and now as a broadcaster is very, very special.  Those of you who have children know what that means.”

Ned Jarrett also noted how important 2011 has been and will be for the Jarrett family.

“A number of good things are happening in 2011,” Jarrett said.  “First is Dale being inducted into the National Motorsports Press Association Hall of Fame.  It was announced last week that he was also elected to the North Carolina Sports Hall of Fame.”

“And it has been documented that I will be inducted into the NASCAR Hall of Fame this year,” Jarrett continued.  “So, 2011 is a very special time for us and our family.”

Jarrett noted that there have been many opportunities for he and his son Dale to share in the sport of NASCAR.   The most special of all, however, was being able to broadcast the Daytona 500, pronouncing his son Dale as the winner.

“To do the things that we’ve been able to do together, like him winning the 1993 Daytona 500,” Jarrett said. “I was working with CBS in the booth.  That was a very, very special moment for us and it turned out it was a very good moment for the sport of auto racing too because that moment has been shown a lot over the years.”

Jarrett noted that his son was also an all-around “sports nut”.  He, as did many others in their tributes to Dale Jarrett, noted his prowess not only on the race track but also on the golf course.

After accepting the presentation by his father and donning the grey NMPA Hall of Fame jacket, Dale Jarrett took a moment to pay tribute to his fellow honorees, as well as the many other honorees in the room.

Jarrett thanked Tom Higgins for “always being a great friend, treating me fairly from the press, and having fun on the golf course” and recognized all of the support he had been given by Waddell Wilson, especially as he struggled with his own Busch Grand National team.

“Whether it be a gear that I needed that he loaned me and never charged me anything to sharing a closed test at Daytona,” Jarrett said.  “These are the things that most people don’t know about that are so important.”

While Jarrett thanked and recognized many in the room who had helped him in his racing career, as well as his current broadcasting career, the most powerful moment of his remarks came when he was recognizing his family, his parents, his wife, his two sons Zach and Jason, his sister and brother-in-law, who were with him for the celebration.

“It’s a tough business we’re in,” Jarrett said.  “When you’re on the road all the time, it makes it pretty difficult.  I was fortunate that throughout a lot of my career, I had my family there. That helped ease things.”

Another famous NASCAR family  member, Kyle Petty, made the induction remarks for engine builder and crew chief Waddell Wilson.  He noted how Wilson’s career as an engine builder at Holman Moody launched his success including winning 109 races, 123 poles and three championships, two with David Pearson in 1968 and 1969, and one with Benny Parsons in 1973.

Petty also noted that the Daytona 500 was a special race for Wilson, just as it had been for Dale Jarrett. Wilson won three Daytona 500s, as crew chief to  Buddy Baker in 1980 and with Cale Yarborough in 1983 and 1984.

“I’m here for Waddell,” Petty said.  “I talked to Waddell the other day and I asked Waddell why am I introducing you.  And he said ‘Because the Pettys have always been a pain in my ass.’

When Wilson took the stage to don his NMPA Hall of Fame jacket, he did indeed reminisce about many aspects of his career, especially chasing after the “Petty blue” cars.  He not only drove in his career, but became one of the sport’s most noted engine builders and crew chiefs.

Steve Waid, himself a noted journalist, introduced the final inductee and his best friend Tom Higgins. Chronicling many of their exploits together, Waid paid tribute to a man that chronicled some of NASCAR’s most interesting times, especially its years of growth and expansion.

Higgins started his career at the Asheville Times in 1958, eventually writing for the noted Charlotte Observer. He was one of the first reporters to cover the sport on a full-time basis and did so until his retirement in 1997.

When Higgins took the stage for his induction, he told story after story about the special people that he had met in the sport.  He was especially emotional telling some of the tales of his favorite drivers who he counted as friends, from Cotton Owens to Dale Earnhart, Sr.

Kyle Petty summed up the honors best for Higgins and all three inductees.

“This is a big deal,” Petty said.  “I grew up in the sport when there wasn’t a lot of media.  Higgins and Steve (Waid) were two of the first.  The group that we had looked after the sport and protected the sport.”

“The sport has gone on to higher heights but the foundation that these inductees laid, we’re not here in this room,” Petty continued.  “It’s important to touch base with that and to continue to educate the new fans.”