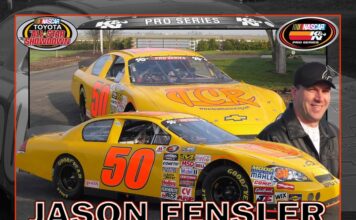 There are many different story lines floating around the NASCAR garages during a race weekend. [/media-credit]The different angles that can be written about are vast as well as limitless, and depending who or what the subject may be about, it seems that most writers are always looking to the major players to get their next big story to write about.

With the popularity along with the start status that surrounds these teams, it’s easy to see how the little guy, or, for a more apt description, the low budget team almost always gets overlooked.

This weekend’s K&N Pro Series All-Star Showdown at Toyota Speedway at Irwindale is no different, and once again the buzz around the garages surrounds a few of the major players in the East and West series, along with one driver who is making his first start at the NASCAR level.

Teamcassracing, which is back in the showdown after announcing a week after last year’s win they would no longer be racing in the series, is fielding the same car that won on July 3 with driver Jason Fensler.

Fensler, will pilot the No. 50 unsponsored Chevrolet which is entered in the showdown as a fan car, when during the weeks leading up to the race they gave the fans the opportunity to put their names on the car for a small nominal fee to help with racing expenses. In today’s high stakes game of racing, sponsors and budgets still need to be met in order for teams to be able to compete.

How unfortunate is it to be considered a low budget team, especially when their outlook and morale are on the same plateau as those of the more highly-funded teams. Family values have almost been lost when you walk around the garages of some of the more high profile teams, but this team has been able to keep the family values alive while living by the phrase, “The family that races together stays together.”

“You have to be a family in order to be a team, and family comes first with us. There is a bonding process that we go through, and once we mesh as family we should do good and that is one of our goals,” said team owner Terri Cass.

Being a family-orientated team does have its ups and downs, and the team is hoping to run more than just the showdown since it takes more than a tight knit family to run the full season.“For my team we are a low-budget team, we are family-owned and to find sponsors it’s tough because of the economy. We run on bare bones, but we run on top dollar equipment,” said Cass.

Cass also added that, “It does get tense without a sponsor, and sometimes those Top Ramens and hot dogs do get old. But my husband Jim and I are willing to sacrifice and eat those kinds of foods in order to put the money into racing.”

With the start of each new season come the challenges along with the high expectations, and even in this third-tier series, the competition is just as fierce as the second and first-tier levels.

When you think about NASCAR racing, try not to forget that there are still the other levels which bring just as much, and sometimes even more excitement than the Sprint Cup and Nationwide series. After all, each driver has to start someplace, and maybe that one driver who is racing on a Saturday night in your own backyard just might become NASCAR’s next big superstar.

The outlook that Teamcassracing is carrying into the 2011 season is very positive, and one that will hopefully see their goals and dreams come true. “Our outlook is really good; I think that we will do very well this season. Those are our hopes and our dreams. We seem to be meshing as a team. We do have some humps and bumps to get over but we should go good.”

Fensler, who qualified 7th for Saturday nights All-Star Showdown, will be looking forward to bringing his new team a better finish than last year’s race, when Auggie Vidovich finished 32nd after an accident took him out of the evenings. “Practice started off okay and we were struggling made some changes in the middle. Roger Bracken made some changes, and the car picked up a lot of speed.” said Fensler after the first practice session on Friday afternoon.

Fensler also added that, “We have a great race car and I think we have a great shot at winning. I’m really happy from Jim and Terri and the rest of the team. I feel real confident and we will go out and see how the cards fall.” Fensler has one win in the K&N Pro Series West division which came back in 2008, and this weekend’s start will be his second in short tracks racing premier event when he finished 28 after an accident in the 2009 showdown.

Fensler talked about this year’s start knowing this same car is the defending race winner at Toyota Speedway at Irwindale half mile oval when he said, “I think it’s the positive and gives me a ton of confidence and the people that own it and run the program.” Fensler finished with, “It puts pressure on my shoulders as far as being able to get the car to what it needs to be performance wise. I would rather have that type of confidence.”