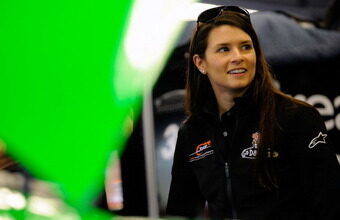 The words from last year continue on into the 2011 season for Danica Patrick. What she needs are “little victories,” things to remind her that she is progressing in NASCAR and learning more and more each weekend. Taking the green flag from the fourth position, she dropped back while others paired up and moved forward with the field. As an inexperienced stock-car driver, the trust veterans had in her drafting skills was weak, most blasting by her within seconds.

Frustration set in. Dropping like a rock to mid-pack, no one looking to pick up and push a driver with only 13 NASCAR races under her belt.

“That just showed me (the two-car draft) is what you gotta do and that’s what they did up front all day.” She said after climbing from her race car, free of any wreckage of the day.

While she finished 14th, a position not representative of how fast and competitive her car was throughout the race, it didn’t all end without a positive.

Almost 30 laps into the DRIVE4COPD 300, skilled veteran Clint Bowyer gave her a shot.

“You look for fast cars,” Bowyer said. “I’m telling you, when you’re racing in that kind of atmosphere, you got to find a fast race car and meet up with it. I knew she had a fast car, and we’d go to the front.”

And he was right. Together they were completing 46 second laps around the two and a half mile oval, blazing fast compared to laps laid down in practice and qualifying.

He pushed her car to the lead, passing cars that led the field through most of the race as they stayed paired up with each other.

With that, she became the first female to lead a lap at Daytona International Speedway in a NASCAR-sanctioned event…a big accomplishment and “little victory” for Danica in the midst of only her second year racing on a partial NASCAR schedule.

Bowyer hung onto the rear of her car for a good few laps before pulling away to cool the car down.

“I was going to push her up to the front, and I did until I got hot and I had to switch,” Bowyer stated.

Its believed that it was a problem between spotters that completely ended the draft between them.

“I was yelling at my spotter, ‘Go find her spotter.’ And I guess he (Patrick’s spotter) didn’t think she needed to be doing that because he wasn’t paying attention.”

That was when Bowyer joked for his spotter to throw her spotter off the stand.

He ended his statements about the pairing with, “She did a good job, today.” Earning respect from veterans is one step in her NASCAR career, a very important one to accomplish to be competitive in future races.

“I really ran up front most of the day. I’m probably not to the point where if I pull out, people are going, ‘OK, she’s going, I’m going.”

She knows the process from rookie to veteran from her IndyCar career, though, the trust factor comes much more into play on a super-speedway where drivers depend on one-another to push them across the finish line.

“That takes a while to earn the trust and respect of the other drivers. I’m not mad at that, it’s just going to take time.”

With a repeat visit scheduled for the July Daytona race, that’s exactly what its going to take: time and effort to make friends within NASCAR outside of her teammates.

Clearly, today many saw her as competitive and as having a fast car, but the trust issue is what it comes down to. Will she spin me out? Will she slow down and send me crashing into the wall?

The questions that may haunt a NASCAR driver as they pull up on an inexperienced driver, or see one appear in their rear-view mirror are never-ending.

While many may have wanted to give her the chance to hit the front of the pack, only a few took the risk.

When it comes down to it, her next race in Daytona will be set up very similar, and if things play out the way they did today, she may be a force to be reckoned with come that night.

Experience. Trust. Confidence. Three things a driver looks for in their “dancing partner,” so while she may have been competitive and fast, it’ll take time for other drivers to see that and grow to a trust-level of pushing her car to the front of the pack.