Dale Earnhardt Sr.; 10 Years Later And The Legend Lives On 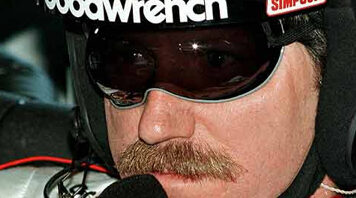 Throughout the years, the world of sports and entertainment has seen its share of fallen heroes, those who in one way or another touched the lives of those around them. Whether in person or watching on television , these legends were the backbone of the culture as we grew up. Many times, we watched them while thinking what it would be like to walk in their shoes.

At times, we tried to fulfill our  dreams by mimicking what it was that made them famous. Life has always been about the journey, with the focus being on reaching the final destination,  knowing that we gave it our best.  From time to time, each of one us have experienced life’s many crises from the different changing events and transitions, all unpredictable moments arriving and intruding into our “well groomed” lives.

We didn’t ask for this interference, and sometimes we find ourselves wondering why it has arrived, bringing with it havoc and confusion. Along with the havoc and confusion, there is one hell of an adventure that is waiting to explode right before our very eyes. The journey that Dale Earnhardt Sr. embarked on is one that, even today, is still one the most talked about subjects whenever the word NASCAR is mentioned.

Ralph Dale Earnhardt Sr. was born April 29, 1951. A NASCAR legend to some, but yet to his family, he was a son, father, brother, and also a husband. Earnhardt was the epitome of what NASCAR racing is all about, and whether you loved him or hated him, the legacy he left behind continues to be the topic of discussion when the season begins at Daytona. With a twinkle in his eye, and a devilish grin on his face, Earnhardt pushed and shoved his way into NASCAR super stardom.

Call it what you want—passion, infatuation, enthusiasm, or just a plain and simple love for the sport. Our modern dictionary is full of words that can be used to describe the enormous impact—good or bad—that this one driver alone has had in the NASCAR series. His highly aggressive driving style made him a fan favorite, which was how he earned his nicknames, “Old Iron Head,” “The Man in Black,” and of course the most famous of all, “The Intimidator.”

Excellence and dedication on and off the track were two of his biggest strengths, along with the zeal to be the best driver. He was tenacious when it came to accomplishing the goals that he set before himself, and very seldom did he ever fall short of achieving what most other drivers could only dream of. NASCAR to him was a way of life, as well as a world that he would dominate in his own special way.

Never has a driver come from such a simple lifestyle to steal hearts—as well as crush a few—on his way to becoming one the sport’s most recognizable figures. His popularity wasn’t constrained to just motorsports alone, and his reputation took him beyond the NASCAR walls and into the limelight of everyday sports. Earnhardt was born a legend, and to this day his name is mentioned amongst some of the greatest sports stars from around the world.

Throughout his storybook career, he took every advantage, as well as the gifts that were given to him, in order to give back to the sport and the fans who gave him so much. Earnhardt’s love for the sport allowed him to become one of NASCAR’s most popular ambassadors, even to the point that fans from across the country are always trying to compare him to the next up and coming star.

Earnhardt not only believed in himself, but he also believed in his own abilities by taking many chances other drivers would frown upon. The Intimidator’s greatness was portrayed in those who chose him as their own hero, even though there were fans who couldn’t find it in their hearts to overlook his aggressive driving style. Either way, “The Intimidator” continued to take NASCAR by storm, while catapulting the sport into the homes of motorsports fanatics around the country, because of his uncompromising driving abilities, which were admired by those who witnessed them.

The word “quit” was never found in his vocabulary, nor could anyone quench the fire that burned deep within his heart to always be the best. Many drivers who come through the series leave some sort of footprint for the next generation driver to follow. These special sets of prints have yet to be followed though because of the legacy hidden deep within the soles, which Earnhardt’s accomplishments made him one of NASCAR’s most decorated drivers. All you had to do is put an ear to them, and almost magically you could listen to history being spoken in a small, still voice.

On a warm, sunlit day back on Feb. 18, 2001, Dale Earnhardt Sr. would buckle himself into his famous black, grey, and red No. 3 Goodwrench-sponsored Chevrolet, just as he had done many times during his 22-year legendary career. Earnhardt had the look of a proud father, knowing that his son Dale Jr. would also be in the starting field. The elder Earnhardt’s life had really taken a turn for the better; The Intimidator was ready to make history, but not the kind that he and Teresa ever thought imaginable.

This would be the last of their customary kiss before each race, because her life too would be changed forever before the end of the day. The green flag waved to start the 43rd running of the Great American race, along with being the biggest audience to ever see a NASCAR race, the fans would also witness one of the biggest blows to a modern day sports hero.

Who could ever forget the words of Mike Helton: “This has to be one of the toughest announcements that I have personally had to make. After the accident in turn four of the Daytona 500, we have lost Dale Earnhardt.” He was gone in the twinkling of an eye doing what he loved best, driving a race car. We all waited for him to walk away and wave to the crowd that he was alright, but instead to the shock of all who witnessed it, this was one that not even “The Intimidator” and “The Man in Black” would be able to survive.

Daytona had taken the sport’s biggest hero, on the first race of what was to be the beginning of NASCAR finally making it to the national spotlight. I guess God had better plans for him, or maybe he just wanted Dale all to himself. Earnhardt would go down as one of Daytona’s biggest heroes, while being honored with a statue out front holding his most prized possession.

His infamous black and red paint scheme with the white No. 3 is still to this day, one of the most famous cars in all of NASCAR history. Death is eminent in any sport, especially when you take into consideration how dangerous NASCAR racing is, because of the high speeds these 3,500-pound cars travel. When the Grim Reaper comes knocking at your door, there is no escaping his deadly grip, since he has no respect for who is next on the list.

Earnhardt never reached his final destination; instead he continued his journey looking down from the heavens above. Legends never rest in peace, instead they keep giving as long as the fans are willing to remember.