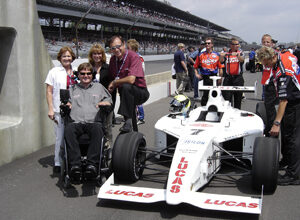 After missing the field last year, Jay Howard will team up with Sam Schmidt to attempt to qualify for the 100th anniversary running of the Indianapolis 500.

They have worked together in the past as in 2006, Howard won the Firestone Indy Lights Championship by winning two races and getting five top-five finishes. Since that championship, its been a tough road for Howard in finding the right team to run with.

“With the success we had as a team in 2006, I can’t wait until May gets here,” said Howard. “SSM puts together a great race car and I like my chances for racing in this historic Indianapolis 500. I definitely have some unfinished business at Indy.”

Howard fell short last year on making his first Indy 500 as he was knocked out of the field in the final few minutes by Takuma Sato.

“I remember watching that final hour of qualifying from our garage in Gasoline Alley last year,” said Schmidt. “I felt sorry for Jay, knowing him personally and how bad he wanted it, but that is part of the drama of Indy. This year, it is our goal to provide the best possible equipment and personnel to allow Jay to show his true potential to everyone.”

Schmidt has visited victory lane 37 times as a car owner in Firestone Indy Lights, — including five times at Indianapolis — and this will be his team’s 10th anniversary of fielding a car in the Indianapolis 500.