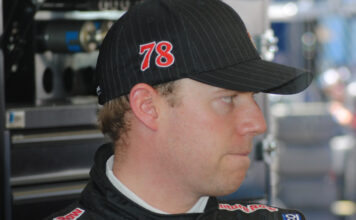 Regan Smith has been described by Mark McCardle, managing director of competition for Furniture Row Racing, as one of the best-kept secrets in the garage area. But Smith puts the credit solely on his team, crowning them the true best kept secrets in NASCAR. [/media-credit]Smith and his No. 78 Chevrolet Furniture Row Racing team have indeed had an eventful start to their 2011 racing season. Right out of the box, the young driver led several laps of the Daytona 500 before being caught up in a late race crash, yet still managing to finish seventh.

“And how good that felt went downhill pretty quick from there,” Smith continued. “We had a strong car and we were in a position where we wanted to be.”

Smith had been working with Kurt Busch at the time and the two were committed to each other since their cars were so good together. Busch unfortunately got separated from Smith, then got an unexpected push from Tony Stewart, and the wreck was on.

In spite of the melee on the track, Smith still counted his Daytona experience as a “really good day.”  He was also most pleased that he and his team were able to rebound from the accident to salvage a good finish.

“To be honest, I was surprised that the car was able to finish,” Smith said. “Usually when you wreck at Daytona, there are two options, one being that you are t-boned and the other that you are airborne. I never thought option three would be that we drove off and finished the race.”

“Just that quick I had to switch my brain off from trying to win the 500 to realizing that this is a 36 race season and we need points right now,” Smith said. “As soon as I finished spinning on the back stretch, that was my mindset.”

Smith admitted that he was definitely angry after the race and “pretty bummed out.” As he was riding to the airport with his fiance after the race, it hit him just how close he had come to winning the Great American Race.

“That’s when it sunk in,” Smith said. “I realized how close we were to this deal. But we recovered well as a team.”

Smith credits his Daytona recovery full to his team, who he says has worked hard to calm him down and keep his head in the game.

“Last year, I would have imploded,” Smith said. “That goes a long way to say how good of a team I’ve got around me.”

After putting Daytona in his rear view mirror, Smith turned his attention to discussing his Phoenix race. He qualified fifth for the second race of the season, but again got caught up in a big wreck that relegated him to finishing 34th, dropping him to the 19th position in the point standings.

“I think we had a bigger wreck at Phoenix than we did at Daytona,” Smith said ruefully. “Last week was just circumstances. We had a fast race car and I was fast all weekend. It was just bad luck.”

While Smith acknowledged that there were many different strategies playing out in the race, with varying tire and pit sequences in play, he also admitted surprise at just how racy many of his fellow competitors were.

“The whole race was like that and I wondered why they were so aggressive so early on,” Smith said. “I don’t know if that all caused the wreck. I think it was just ignorance.”

This weekend, Smith is ready to tackle Las Vegas Motor Speedway. He practiced well and qualified 12th for the Kobalt Tools 400.

“Off the truck, the car was good,” Smith said. “We have some ideas for what we want to change in race trim. But overall, we had another solid day with our Furniture Row Chevrolet.”

“I feel strong about this weekend,” Smith said. “We’re looking at this weekend just like we did Daytona and Phoenix. We’re here to get top tens now.”

“That’s our goal and there will come a point when we get top fives,” Smith continued. “That will be cool.”

Smith admits that he and his team are focused but also have a bit of a chip on their shoulders, especially since they are the only team based out of Denver, Colorado, not Charlotte, North Carolina.

“We’ve all got a little chip on our shoulder being from Denver,” Smith said. “We want to prove that we can not only run good from Denver but we can run as good as these big super teams.”

“I don’t think anybody in this trailer or on this team is surprised about how we are starting this year off,” Smith continued. “We’re kind of off the radar. But I know this is what I expected and this is what all these guys expected.”

“I look at it as I’m with a team that’s the best kept secret in the garage,” Smith said. “I know the people that I get to work with and I wouldn’t trade it for any other team in this garage.”