Dale Earnhardt Jr. is back in the thick of things but says team can do better 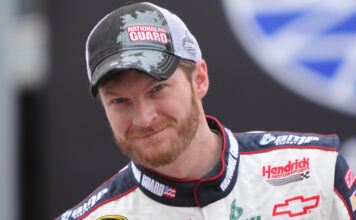 [/media-credit]To be mentioned in the top-10 in any category for Earnhardt Jr. is an accomplishment after two years of riding off the radar. When you’re NASCAR’s most popular driver that’s hard to do, but when you haven’t won a race, qualified for the Chase and run mid-pack each weekend, people tend to forget about you after a while.

After four races in 2011 the No. 88 AMP Energy/National Guard team is working hard to become the center of attention for all the right reasons. New crew chief, Steve Letarte appears to already be paying dividends early in the season and Earnhardt Jr. has been pleased with the performance of his cars, but knows he needs to be taking care of business on his end.

“We should have finished higher,” he said of Bristol. “I screwed up speeding on pit road and that cost us a lot of spots there. But I’m just trying to do the best you can each week.”

Following a wreck in the final laps of the season opening Daytona 500, Earnhardt Jr. and company have finished 11th or better in the last three races. While they may not have started off fast in practice of qualifying, the team has been able to make the No. 88 better throughout the weekend and during the race when adjustments are needed.

That to Earnhardt Jr. is “a really good thing.”

So is working with Letarte. The two have a lot in common and good communication, Earnhardt Jr. says, is easy between them. It has even been reported that Letarte has Earnhardt Jr. arriving to the garage earlier and leaving later than he use to.

According to Earnhardt Jr. it helps to talk face-to-face instead of texting. More work can be done on the car. Ideas are being bounced around and everyone is on the same page.

Yet, even with his fast start and plenty of positives, Earnhardt Jr. says there is comes a point when he’s unhappy.

“I was last week,” he said. “I was a little disappointed with myself and a little disappointed at how we began the race. I was just frustrated that we weren’t closer. We felt like we were a little bit better than that at the end of practice, so it was frustrating that the car showed a lack of grip it has at the start.”

Though frustrated, Earnhardt Jr. says you just have to go to the next race, eliminate mistakes and get the finish the car is capable of.

However, in the last five races he’s finished 16th or worse. His overall average finish in California is 22.3. There is no better time to improve on those numbers than this weekend and with a team that Earnhardt Jr. has high praise for when asked if they were top-10 material.

“Yeah, I do,” he said, not only of this weekend but in general.  “We’re capable of that. We’re good enough for that. You should come to the racetrack and expect to run around guys that are in that position. I feel like we’re legitimate, yes sir.”

After appearing to be in a two-year slumber themselves, only making noise to voice their displeasure, the nation as awaken and are thus far enjoying what they are seeing with from their driver. For the first time in a long time they feel as though a win might be around the corner.

Earnhardt Jr. was pleased to hear of his fans enthusiasm.

“That’s good,” said Earnhardt Jr.  “I just hope we can run a little bit better and get a top five and challenge for some wins to really give them something to cheer for. I’m glad we’re running better, but in the grand scheme of things we were unable to run 10th or 11th last year. I think we can do better. We’re showing good signs of improvement and hopefully we continue to get better and we can challenge for some wins.”

Should Earnhardt Jr. win one of the next seven events it would be a relief for a few reasons. Not only to erase his winless drought but it would earn his place in the 2011 Sprint All-Star race, which he is currently not eligible for.

As of last Wednesday, Junior Nation was already taking to the voting polls to help him earn an entry through the Sprint Fan Vote. Since Earnhardt Jr. won the All-Star race in 2000, his 10-year automatic entry has run out and he will need the Fan Vote or to transfer from the Showdown in order to compete.

If California doesn’t go as planned, there’s always next week and Martinsville, a place Earnhardt Jr. says he’s looking forward to and feels he’s close in challenging Denny Hamlin and Jimmie Johnson for a win.

“I’m excited about going there and trying to see if there is a difference in how I can compete versus what I’ve done over the last 10 years just due to having Steve.”