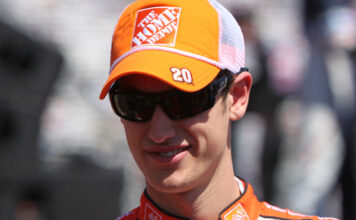 [/media-credit]Winning at the restrictor plate tracks of Daytona and Talladega usually comes as the result of a driver who happened to be in the right place at the right time. When Joey Logano and his No. 20 GameStop Toyota team head to the Talladega Super Speedway this Saturday for the Aaron’s 312, it cannot be without thinking of what could have already been. The Joe Gibbs Racing team has yet to pull into victory lane but it hasn’t been for a lack of effort.

Logano has only raced at Talladega twice in Nationwide career but statistically it is one of his best tracks. In 2009 he finished third and last season he finished a position higher in second. In both races however, he was the pusher, the driver who sent eventually winners David Ragan and Brad Keselowski to victory lane. It’s only natural that this Saturday Logano wants the roles to finally be reversed.

“I really feel like Talladega owes me one after the last two years there,” said Logano. “We’ve pushed the eventual winner to the victory the two years in a row now, so maybe this year, it’s my turn and someone will help push me and the No. 20 GameStop Toyota to the victory. “

Logano did admit that if he had to push someone to victory at least it was a good friend in Ragan back in 2009. It doesn’t however, make losing feel any better and Logano badly wants his first restrictor plate victory. Saturday he’ll be driving a brand new car built by JGR after the chassis they had planned to take race was damaged in Daytona.

Logano and teammate Kyle Busch dominated the season-opening DRIVE4COPD 300 but neither made it to the checkered flag in the positions they were hoping for. Busch was pushing Logano and they got to the lead when it appeared Busch might have pushed just a little too hard and sent Logano into the wall in turn one.

He finished 12th after leading 22 laps. Racing in that event as well as the Daytona 500 will be an advantage for Logano. Already feeling like he’s become a decent restrictor plate driver, the track time he had and racing in the two-car drafts will be what’s important. Those who know when and where perform ‘the swap’ are the drivers who are the ones to contend with. At Daytona it was Logano and Busch who appeared to have mastered making the swap and preserving their cars.

The new style of racing that has drivers wondering who is on their radio will again be rearing its head at Talladega. Many have already said that as soon as the track opens look for the tag teaming to begin.

“I really like restrictor-plate racing and I feel like I’ve gotten pretty good at it since I started,” Logano said. “I’ve run really well in everything I’ve driven at Talladega, from my Cup car to the Nationwide car, Truck Series and even in ARCA.  I’ve just never been able to get a win.  I have learned a lot about racing in the draft and what moves to make and when to make them.  There is an art to it for sure.

“It is a little different though in the new Nationwide Series car with the two-car draft.  That two-car deal is very important.  But we showed in Daytona that we are good in the draft and if you get hooked up with the right person, you can get to the front.  Hopefully, this will be our year at Talladega. I’d love to get Adam and all of the new guys on the No. 20 team into Victory Lane.”

The right person will most likely again be Busch. The two have always worked well together but have struggled to seal the deal and pull into victory lane. Busch hasn’t won a NNS restrictor plate race since July of 2007 at Daytona. If all goes according to plan the Logano/Busch Camry’s will again be locked together and leading the field, this time with a different ending for a different looking GameStop car.

“I got a chance to see the Talladega car with the Mortal Kombat paint scheme on it in the shop and it looks sick,” said Logano. “It will be a nice change from the red and black car we’ve run the first few races of the year.  It will stand out for sure. … It’s a car that will look awesome in Victory Lane photos, so hopefully, we can get it there.”

Crew chief Adam Stevens has confidence that his young driver will be up front and a contender for the win. And he too, is looking toward working with Busch to make JGR the ones to beat.

“I feel like our superspeedway program is right there,” said Stevens while acknowledging how strong Logano and Busch ran in Daytona. “So much of these races comes down to who you are hooked up with and who can push who.  Hopefully, Joey and Kyle can get hooked up like they did at Daytona and get the Gibbs cars up front.  We’ll see how it all shakes out come Saturday, but I know we’ll be right there in the thick of things again.”