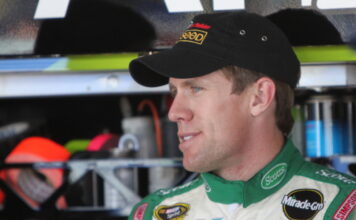 1. Carl Edwards: Edwards led 57 laps at Darlington, and seemed well on his way to victory when an untimely caution with 10 laps to go altered the course of the race. Edwards and most of the front-runners pitted for tires, while Regan Smith stayed out and took the lead. Smith withstood Edwards’ charges and held on for his first career Sprint Cup win.

“It would have been great to honor the birth of my son with a win,” Edwards said. “As it was, Kyle Busch and Kevin Harvick were the ones paying homage to infantile behavior. I really thought we made the right decision to pit, but Smith wouldn’t let me by. He won the battle; Busch and Harvick started a war.”

2. Kyle Busch: Busch was battling with Kevin Harvick and Clint Bowyer for sixth on lap 363 when contact between the three sent Bowyer spinning. After Harvick bumped Busch’s No. 18 Doublemint Toyota from behind, Busch retaliated by spinning the No. 29 Budweiser Chevy. And incensed Harvick later tried to punch Busch, but Busch simply drove away, sending Harvick’s parked car into the pit road wall. Busch finished 11th, and met with NASCAR officials, along with Harvick, Richard Childress, and Joe Gibbs after the race.

“Maybe now,” Busch said, “Harvick will have a new appreciation for the ‘drive-through window.’ I was just sitting in my car minding my own business, when Harvick appears out of nowhere. I refuse to sit ‘idly’ by and give him a free shot at my head. I’m not afraid on him; I just simply drove off the ‘beaten’ path.

“Despite fines and penalties from NASCAR, I stand by my actions. In regards to punishment, I listened to what NASCAR had to say. But like any driver worth his salt, I didn’t ‘hear’ it. Some have ‘selective hearing;’ I have ‘disciplinary hearing.’”

3. Jimmie Johnson: Johnson survived an early spin courtesy of Juan Montoya, making a spectacular save to keep the No. 48 Lowe’s Chevrolet off the wall. Johnson recovered, and overcame a subsequent spin due to loose handling on lap 220, and was primed for a top-10 finish. But a loose lug nut 10 laps from the end forced him to the tail end of the longest line, and he finished 15th. Johnson remains second in the point standings, 23 out of first.

“It’s on!” Johnson said. “Unfortunately, I’m referring to the Kyle Busch-Kevin Harvick feud, and not the lug nut in question.

“I’m embroiled in a feud of my own, with Montoya. Of course, JPM apologized for spinning me. Now, I’m not sure I’m ready to forgive him. Frankly, as a five-time Cup champion, I’m about sick of making ‘acceptance’ speeches.”

4. Kevin Harvick: Harvick finished 17th at Darlington after Kyle Busch sent him spinning on lap 363 in retaliation for what Busch called “unacceptable racing” on Harvick’s part. Afterward, Harvick insinuated that his business with Busch is far from done. Harvick is fifth in the Sprint Cup point standings, 50 behind Carl Edwards.

“It’s far from over,” Harvick said. “I know that, Busch knows that, and NASCAR knows that. Even my sponsor, Budweiser, knows that. Hence, the presence of a special Budweiser slogan on my car for upcoming races that says, ‘This Bud’s Coming For You.’

“Kyle’s mother must be proud. In Mrs. Busch’s honor, I’d like to extend Happy Mother’s Day wishes to her via Kyle when I say ‘Your momma.’ But let’s not let our feud take away from Regan Smith’s victory. It was truly a magical night at Darlington. Even I tried a little magic of my own when, much like a magician pulling a rabbit out of a hat, I tried to pull a ‘chicken’ out of the No. 18 car. Even Kyle got in on the fun with his little ‘disappearing act.’”

5. Ryan Newman: Newman posted his fourth top-5 finish of the year with a fifth in the Showtime Southern 500. He led 28 laps, and improved two places in the point standings to sixth, 61 out of first.

“You may have heard,” Newman said, “that I threw a punch at Juan Montoya during our meeting with NASCAR officials to discuss our budding feud. I gave reconciliation a chance. Apparently, there’s just no getting through to Montoya. I’ve always said, ‘Don’t knock it ‘til you try it.’ So I did.”

6. Dale Earnhardt, Jr.: Earnhardt finished 14th at Darlington, victimized by a penalty for hitting the pit road entrance cone on a lap 329 stop. He remained fourth in the Sprint Cup point standings, 47 out of first.

“It was a crazy week at the track,” Earnhardt said. “Even inanimate objects weren’t safe from being hit. Surprisingly, orange safety cones are a lot like certain drivers, in that safety cones don’t fight back, either.”

7. Tony Stewart: Stewart took a gamble at Darlington, staying out while most of the leaders pitted after Jeff Burton’s blown engine brought out the caution on lap 359. It paid off, as Stewart gained substantial track position, and scored his fourth top-10 finish of the year with a seventh. He jumped three places in the point standings to seventh, 65 out of first.

“From what I hear,” Stewart said, “even a meeting with NASCAR did nothing to settle the Ryan Newman-Juan Montoya feud. And that’s no surprise. Both Ryan and Juan are very headstrong, so it’s shocking to see that neither was willing to show ‘resolve.’

“Montoya was unwilling to take any responsibility for wrecking Ryan at Richmond. Are we supposed to believe that his spin of Ryan was simply an accident? I think Ryan has resigned himself to accepting that claim, no matter how implausible it seems. That’s why he’s taking no responsibility for punching Montoya. That’s called the ‘Oops! Upside Your Head’ defense.”

8. Clint Bowyer: Bowyer saw a possible top-5 finish disintegrate when he spun into the inside wall after Kyle Busch, Kevin Harvick and Bowyer battled door to door on lap 363. Bowyer’s No. 31 BB&T Chevy was done for the day, and he finished 31st.

“I knew I was in trouble when Busch, Harvick, and myself came out of the corner side-by-side-by-side. That kind of lateral racing can lead to only one thing: collateral damage. And that was me.

“Of course, as we already know, Harvick won’t take Busch’s actions sitting down. Kevin’s reputation is that of someone who never backs down. Everyone expects Kevin to retaliate, and I’m sure he’ll be ‘Happy’ to oblige.”

9. Matt Kenseth: Kenseth blew a tire early at Darlington and fell three laps down and was never able to catch a break to regain track position. When his night at Darlington was done, Kenseth posted a finish of 25th, his third result outside the top 20 since winning at Texas on April 9th. He dropped one place in the point standings to tenth, 83 out of first.

“I was an early victim of the ‘Lady In Black,’” Kenseth said. “It’s possibly the first time in my life I’ve been chosen first by a woman.

“As for the Kyle Busch-Kevin Harvick, it appears NASCAR was somewhat lenient with punishment. But that’s not surprising. Of course, NASCAR’s backed themselves into a corner by advocating the ‘Boys, have at it’ mentality, which, as history shows, is inevitably translated by drivers into the ‘Boys, have a tit-for-tat’ mentality.”

10. Kasey Kahne: Kahne started on the pole at Darlington and led 124 of 370 laps on his way to a fourth-place finish, his second consecutive top-5 result after last week’s third at Richmond.

“I’m riding a wave of momentum right now,” Kahne said. “But I won’t get complacent. In this sport, momentum is like a one-year contract—very fleeting. I have to hand it to Red Bull for signing me to a one-year contract with the knowledge that at year’s end, I’ll say ‘Bull split’ and head over to Hendrick. Mighty Kasey doesn’t strike out; he strikes deals.”