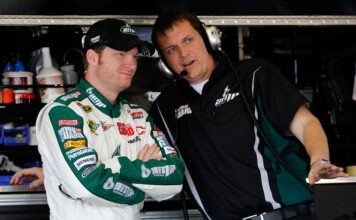 When listening to the in-race audio channel for the Hendrick Motorsports No. 88 AMP Energy/National Guard Chevrolet, many credit crew chief Steve Letarte with being the consummate cheerleader and encourager for his driver Dale Earnhardt, Jr. [/media-credit]While Letarte admits that he is a positive kind of guy, he also credits NASCAR’s most popular driver as being equally encouraging.

“Being positive is not something that I consciously do,” Letarte said. “I think it’s just my personality.”

“Mr. Hendrick is big into personality tests and I’m a green,” Letarte continued. “I normally look at the brighter side of things.”

“They all think it’s a plan or a theory on how we’re going to run the best,” Letarte said. “It’s just who I am and how I work.”

“It’s different for each race car driver but for Dale, I think being upbeat on the radio helps him,” Letarte said. “But there’s a line too. You can’t be a cheerleader with no facts, because that gets old and you kind of see right through it.”

“I think Dale understands that I’m realistic about what I’m talking about and I’m not going to sit there and try to motivate him to do things I don’t think we are capable of doing,” Letarte said. “I think we’ve found a very good line of what’s a realistic goal and then we try to motivate and encourage each other to get to those goals.”

“And it’s worked,” Letarte continued. “Dale’s done a tremendous job in the race car and he’s encouraged us and given us a lot of confidence in ourselves setting up race cars.”

“His driving style suits our cars very well,” Letarte said. “So, overall it’s been a success.  It’s still early but so far, so good.”

While Letarte admits that his team owner no doubt purposely paired him with Earnhardt, Jr., he feels that a positive and encouraging crew chief is good for any driver, particularly at NASCAR’s highest level, the Sprint Cup Series.

“It’s good for anybody,” Letarte said. “I always put myself in their shoes.”

“The difference between a crew chief and a race car driver is that I can take a break,” Letarte continued. “I can get down off the pit box and go get a water and relax and take a 30 second break from the race, and they can’t.”

Letarte has indeed learned his encouraging crew chief style from some of the best in the business, from Ray Evernham to Robbie Loomis, both former crew chiefs for four-time champion Jeff Gordon.

“The biggest thing I’ve done is been able to work with so many good motivators and encouragers that I’ve been able to take a piece of all of them,” Letarte said. “Ray (Evernham) was the ultimate motivator.”

“And I try to be somewhere in the middle,” Letarte said. “I want everybody to have enough desire to try and succeed but at the same time be balanced.”

While Letarte works hard to be that consummate encourager and motivator, Letarte admits that he sometimes succumbs to the dark side.

“The guys that have been around me a long time have learned that and they almost go two separate ways because they know,” Letarte continued. “It gets some of the newer employees in trouble because they will come across light-hearted and I’m not light-hearted at that moment.”

Letarte also admits that he has little tolerance for driver to crew chief chatter that in any way is not encouraging or worse yet, berates the team. He acknowledges that his driver may get animated or excited but he would in no way allow his driver to throw the team under the bus.

“I don’t think I would have the tolerance that some of the other crew chiefs have,” Letarte said. “I’m fine with the driver being frustrated and I’m fine with him being animated or disappointed.”

“But I’m not OK with any personal attacks on the race team or anyone on the team,” Letarte continued. “If you put me with a driver like that, we wouldn’t last very long.”

“I handle all my issues behind closed doors,” Letarte said. “That’s how Dale and I handle all our stuff.”

With that open communication style, Letarte is most encouraged that his driver, and most important, his team will soon be in Victory Lane.

“I am absolutely hungry for a win,” Letarte said. “It’s been a long time since I’ve been to Victory Lane.”

Given that he has not been to the winner’s circle yet this season, to whom does Steve Letarte turn to when he needs a little encouragement? For that, he moves from his driver and race team to his family for encouragement, particularly his children.

“I think having kids has also helped me,” Letarte said. “I have a 5 and 7 year old so maybe I take things a little slower and enjoy it a little more.”

“Family, I think, it puts it all in perspective,” Letarte said. “I remember in 2005 when I took over as crew chief, we went to Martinsville and we won.”

“And I came home and I was so excited and my little boy at the time was not quite two and he could have cared less,” Letarte continued. “He didn’t even realize there was a race that day.”

“Life is way more important than your job,” Letarte continued. “While our jobs here feel like life, and they are, at some point you have to pull away.”

“I think that’s my ticket as I have an outlet outside this garage where I spend time with my kids and my family,” Letarte said. “I realize at that point that the world’s not coming to an end if we run bad.”

“I enjoy my job and I love what I do,” Letarte continued. “I don’t take that for granted. I love to race but I race for a living.”

“At the same time it’s important to be successful and to be successful in this sport, it’s all about having to run well on Sunday afternoon,” Letarte said. “And that’s what Dale Junior and I encourage each other to do.”