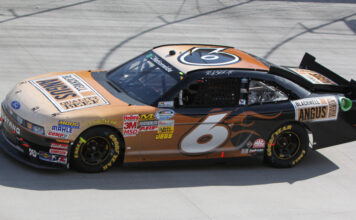 [/media-credit]Stenhouse Jr. took the lead from Roush Fenway teammate Edwards on the restart with 18 laps to go and never looked back. Stenhouse Jr. drove his No. 6 Blackwell Angus Ford Mustang to his first career NASCAR victory in 51 starts and is also the first NNS series regular to pick up a victory this season.

“That last caution I was doing some real praying for a good restart. Iowa was not my favorite place but it is now. We crashed three cars last year here and to come back this strong with these same No. 6 guys means a lot. We had Blackwell Angus on the car and that’s awesome. I just can’t thank Nationwide and this series and all the fans that came out here today enough for this opportunity.” Stenhouse Jr. said.

“The Ford Mustangs were fast today. I asked for an adjustment late that I should not have and I got really loose. Ricky was loose to, but he just did a really good job.” Edwards said.

“Just awesome! Ricky Stenhouse is going to be a factor in this stock car racing for many years to come; certainly long after I’m gone and I’m glad to be here for day one for him.” said team owner Jack Roush.

“A solid effort by the Discount Tire Dodge team today. This is a great facility and a fun track to drive. The fans here are amazing and it creates a great atmosphere for racing. Our car was good, but not great. The two Fords were really fast today and we just didn’t have enough at the end to make a run at them. A strong day for our race team and I’m happy for Ricky  to get the win. He’s a class act and has worked his tail off to enjoy this win.” Keselowski said.

The series heads to Charlotte Motor Speedway next week for the Top Gear 300.