The Coca Cola 600; ‘The most valuable resource is the human resource’ 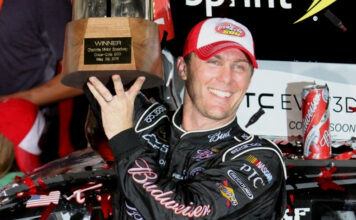 The Coca Cola 600 is the longest race of the year. It was also the hottest race of the year so far. It is always a test of patience and endurance, not only for equipment but for the drivers as well. As a rule the 600 boasts an exciting beginning and exciting end with a nap in between. But this year was different. They raced from the green flag to the checkers. They raced from 1st to 31st. [/media-credit]The race has had people scratching their heads why was this one different? Why was this race so good and the others this year were merely luke warm. Was it the tradition? Was it the track? Was it being at home in front of family and friends? No doubt all of those things played a part but perhaps the real difference came not in the 600 but a week before in the All Star Race.

When we look at the competition level we find that teams that made no bones about the fact that they were testing in the All Star Race, excelled. Drivers that up to this point in the season seemed snake bit had cars that they could count on. Cars that were stable and predictable, maybe not through the whole race but they could be adjusted on pit stops and the driver put back in the hunt. These cars were fast, really fast. They had speed that didn’t disappear after a 150 laps, but was there in the end as well.

The Sprint Cup boys had their best driving shoes on and their very best fire suits. They made the Indy 500 look drawn out and over hyped. They did what they do best. They RACED from green flag to checkers. The winner wouldn’t be decided until the tri-oval out of 4. Sadly, the race ended with fuel mileage deciding the winner. But it wasn’t a typical fuel mileage race either. It was a barn burner that wouldn’t be extinguished until long after the checker flag waved.

What was the difference? They tested the week before. They took 100 laps of no points racing and turned it in to a test session. Crew chiefs took notes engineers made changes the week before the 600 was perhaps the busiest week of the season because they had functional information that was acquired in real time by their driver and their team at a real track. It was not computer simulated. It was not a projected forecast. It was real information. In team meetings engine people could talk to drivers about feel and need. Chassis designers and engineers could actually quiz a driver on feel reaction what did they have? What did they need? What did they want? What do we need to change to make this a winning car? The drivers could answer the questions. They had raced the cars. They had gone up against Carl Edwards and the Roush/Yates FR9. They had experience with 4 sticker tires on the green flag. They had real time real life information.

They say knowledge is the greatest weapon that man kind can possess. In this case it was proven true. This scenario and its outcome proved that as Tony Stewart said, “Technology can do wonderful things for us off the track but it can really hurt us on the track.” This race proved him right. This race wasn’t about computer programs or simulation engineers. This was old school driver input combined with engineers and technology and the result was a winner.

NASCAR will say it was the feel of being at home, of sleeping in their own beds. But that doesn’t explain the cars consistency and speed. It doesn’t explain why a team that has struggled to stay out of their own way suddenly is a top 10 team. It doesn’t explain why suddenly in the longest race of the year drivers were willing to drive it in deep and floor it up off and continually go three and four abreast. That is called confidence. That didn’t come from a crew a chief who is a dynamic salesman. That came from experience and being a part of the big picture. That confidence came from having tested the cars. From having the information and being a part of the overall set up. They knew what the car would do. They had been here before. Rusty Wallace, the week before had stated that, “The elimination of testing has been the biggest blow to our sport in my opinion, than anything else.” The 600 proved him right.

It’s time for NASCAR to take a long look at the overall status of competition and listen to the fans. Surrey racing is not entertaining. Follow the leader racing is not competitive. 2 hours of run away train is boring. But if you give them time to put it out there and work on it. If you put the human element back in the equation what you have is what is missing from the series….Racing.

The Coca Cola 600 was without a doubt the surprise of the year. It was one of the very best races we have had in 2011. It wasn’t just a great finish. It was a great race. From Green Flag to Checkers the boys of summer took us back to a better day, when men drove machines to the very edge of the envelope lap after lap and even though we sat on the other side of the TV or the fence they took us with them. It was what made racing a household word. It evidenced that “The most valuable resource is the human resource.” There is no substitution for the fan in the stands or the driver in the seats. The driver in the seat knows what it takes to make the car go fast and race it to the end. The fans know what constitutes a great race. Hopefully the Coca Cola 600 will show NASCAR that real world can be better than virtual reality.

Congratulations to Matt Kenseth on his NNS victory in replacement of Trevor Bayne in the 16 Jack Roush Fastenal Ford Mustang. Bayne will return to competition this week at Chicagoland Speedway.

Congratulations to Kevin Harvick on his Sprint Cup Win in the Coca Cola 600. It was a great show of perseverance from Kevin and his RCR Budweiser Chevy team.

Congratulations to Dan Wheldon on his Indy 500 victory.

I feel it necessary here to congratulate J.R. Hildebrand on his Indy 500 effort. It was a gallant effort and an incredible performance. You proved you can win the Indy 500. Your presence of mind to stand on the gas in what was left of the car was proof positive that you have what it takes. Yours will come.

Also congratulations to Dale Earnhardt Jr and his National Guard/Amp Energy, HMS team lead by Steve Letarte. Earlier in the season you said you wanted to be viewed as relevant again. You have achieved that. You said you wanted to be a contender for race wins again. You have achieved that. You came up a turn and a half short of achieving the next of the goals you cited, winning a race. You have come a long way. Congratulations on a heroic performance and effort.