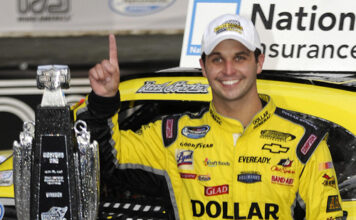 Reed Sorenson had enough fuel to make it to the finish line to win Saturday’s NASCAR Nationwide race at Road America. [/media-credit]Justin Allgaier was leading when the final yellow flag came out on the final restart in the third attempt. But Allgaier ran out of fuel before making it to the finish line. Unable to keep pace lap speed, Allgaier surrendered the lead to Sorenson.

At the same time, Ron Fellowes did not slow when the final yellow flag came out and passed both Sorenson and Allgaier before getting behind the pace car. Fellows appeared to have won the race until NASCAR reviewed the tapes a saw that Fellows did not slow when the caution light was displayed, giving Sorenson back the lead and the win.