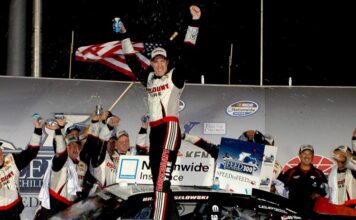 Brad Keselowski dominated the Feed the Children 300 at the Kentucky Motor Speedway leading 132 of 200 laps. His closest challenger, Kevin Harvick had an apparent miscue from his crew chief that cost him valuable time as there was some confusion as to whether Harvick was stopping for fuel in the final 10 laps. As Harvick slowed, Keselowski pulled away further even though Harvick’s crew chief called off the stop. That allowed Keselowski to conserve fuel more. The final 61 laps were run under green flag conditions.

Harvick finished second was said he thought that his car was great but there needed to be better communication from on top of the box. Kyle Busch finished in third after starting the field in 43rd as a result of him crashing during his qualifying effort.  Busch was followed by Kasey Kahne who drove the JR Motorsport No. 7 Go Daddy car, his first time in that Chevrolet. Pole-sitter Elliot Sadler finished 5th and left Kentucky with the points lead even though he struggled at times during the race to get into the top 10.

Busch said about his night, ” I screwed up qualifying today and ‘fenced’ the NOS Energy Drink Camry.  But, we had another one in the truck.  The guys did a great job putting it together and getting it ready and just in time.  Probably didn’t have as much time as they would have liked to have spent on it, but all in all we gave it the best we had.  Probably was going to be about a fifth or sixth before all the fuel exchanges and everything going on there at the end.  Thank all the guys.  They did a great one for me tonight. ”

The win was Keselowski’s 13th in the series. One thing that was overheard in the media center was Keselowski explaining that his beer was better than Harvick’s. Both run in Saturday’s 400 mile race .

“This car was awesome. The boys at Penske Racing spent some extra hours on it and it feels good. I think we got more in the hopper. To see this team start coming along feels great.

“The guys at Discount Tire have been behind me, supporting me. They made this program possible so we could win the championship last year. (We) got banned from it this year, so now we’re just out here having fun.

“If you keep doing the right things long enough, you will be rewarded and today was a day of reward. I can’t wait to see a bunch of the Discount Tire guys this week bring them home a trophy,” Keselowski said. Ed Coombshttp://www.sportshooter.com/coombse
Ed began covering NASCAR for the former Gater Racing News regularly in 2000. He began working with Speedway Media in 2003 by supplying exclusive photos from the races covered. Currently he is the Editor and Assistant Publisher of Speedway Media. He also manages staff and credentialing. With the closing down of Gater News after nearly 50 years he hopes to become a more regular contributor at Speedway Media as a writer and photographer. My Twitter name is @coombsed feel free to follow me I am a member of the National Motorsports Press Association.
Previous articleTOYOTA NASCAR Nationwide Series (NNS) Post-Race Notes & Quotes Kentucky Speedway
Next articleF1 – Webber leads Red Bull qualifying sweep