NASCAR and The Brickyard; A Perfect Match 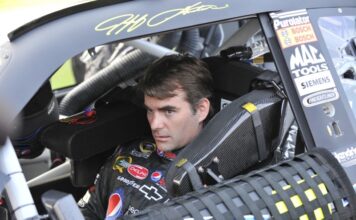 When stock cars first graced the Indianapolis Motor Speedway in 1992 for a Goodyear tire test, the hallowed grounds of the speedway were rocked with a sound never heard before. Drivers were excited as were crews, fans and dignitaries from the speedway and NASCAR alike. Every driver wanted to be able to say, “I was the first driver to turn cross the yard of bricks, in a stock car!” [/media-credit]The drivers were sent out onto the speedway in numerical order, and since there was no number one car, Rusty Wallace in his number two Penske Pontiac was the first car to hit the speedway. Thinking that the warm up lap was going to be an easy cruise, Wallace never expected to see a car catching him. “I looked up in my mirror and saw this black car getting closer” Wallace said. That car was none other than the late Dale Earnhardt Sr.

Earnhardt passed Wallace down the front stretch and right then and there, is where the stock car competitiveness began at Indianapolis.

In 1994, NASCAR graced the grounds once again, but only this time, there was a race taking place. On Saturday August 6, 1994, the tradition began with the Inaugural Brickyard 400. The race was filled with a record number of lead changes for the speedway at the time, and some of the most side by side battles at the speedway. The race was won by none other than a driver that called Indiana his home, Jeff Gordon.

While the win was special for Gordon, drivers like Dale Earnhardt Sr. and Tony Stewart, had some extra incentive placed on winning at the Brickyard.

Earnhardt, a seven time cup series champion, wanted nothing more than to be the first driver to roll into victory lane at Indianapolis in NASCAR. After a lap two pounding of the turn four wall, Earnhardt wanted to become the first “man” to win the Brickyard 400. When the second annual Brickyard 400 finally got underway, Earnhardt began to show what kind of driver he really ways. After a late race pit stop, then leader of the race, Rusty Wallace, had troubles on pit road due to cars in front of him and multiple scares with loose tires. Wallace tried desperately to get out first, but when he got to the backstretch, that black car that passed him back in 1992, was right there again, and just like that time, he blew right passed him.
Dale went on to claim the victory indeed becoming the first “man” to win the Brickyard 400.

Growing up in Indiana, Tony Stewart had always dreamed of winning the Indianapolis 500 in an Indy Car. Never in his wildest dreams did he think he would be racing at the Brickyard in a stock car. Stewart, who was one of the member of the Indy Car world who did not like stock cars coming to Indy, was in the middle of a successful Indy Car career when he was signed by Joe Gibbs Racing for 1999. Always being one of the favorites to win, Stewart placed even more pressure on himself. In 2005, that dream was finally a reality after holding off Kasey Kahne in a late race shootout to win his first Brickyard 400. Taking in the moment buy hanging on the fence, and grabbing a Coke from his family, Stewart had finally lived his lifelong dream of winning at the Brickyard.

Many other drivers have graced the checkered floor of victory lane in the Brickyard 400. Names such as; Elliott, Harvick, Jarrett, Johnson, Labonte and McMurray. Indianapolis is a place where the cream rise to the top more than any other racetrack on the NASCAR circuit. You cannot fluke your way into a good run here.

You must put the whole package together to be among the greats, as an Indianapolis winner.

With the vast amount of history the speedway brings, and how far the sport of NASCAR has come in just over sixty years, the two are a perfect match for each other. They both show the fruits and labors of the racing world over the years better than maybe any other combination out there.

While the racing may not be stellar by any standards, the element of winning at Indy is probably the most difficult. History takes center stage when you come to the Brickyard.

SM Staff
Previous articleWill This Years Brickyard 400 Have Last Lap Drama Like In May?
Next articleJamie Mac Needs to Make Hay at Indy