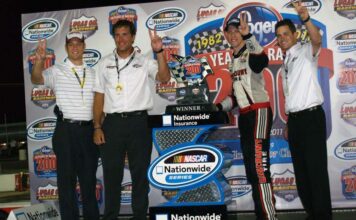 [/media-credit]After starting on the pole and leading 189 laps of the Kroger 200 Nationwide Series race at Lucas Oil Raceway Saturday night, Ricky Stenhouse Jr. could almost taste the win. But with Brad Keselowski in the picture nothing is certain.

After a green-white-checkered restart, Keselowski wasted no time in overtaking leader Stenhouse Jr. and blasted across the finish line for his second win this season in the Nationwide Series.

“It’s a very special win being from Michigan,” Keselowski said. “I’ve been coming to this race track for years. I’ve been to victory lane as a team guy and a mechanic but never a driver. It’s so special to win here and win here in a Dodge.”

The majority of the race was tame with Roush Fenway Racing teammates, Stehnouse Jr. Carl Edwards and Trevor Bayne leading the pack.  Elliot Sadler who started the race in last position and rookie Austin Dillon were also looking strong as the race began winding down.

The action became more heated towards the end of the race. Things began to go badly for Carl Edwards after a caution on lap 175 for a wreck involving Steve Wallace, Michael Annett and Tim Andrews. Edwards was penalized for exiting too fast off of pit road. He slowly worked his way back towards the front but the penalty cost him a shot at the win.

Dillon did not pit and restarted the race in first position, followed by Stenhouse Jr., Bayne, Sadler and McDowell. But Dillon didn’t keep the lead long and was quickly passed by Stehnouse Jr. and Bayne advanced to second place.

But with only twelve laps to go, Bayne suffered a blown engine, bringing out another caution.

More chaos ensued when Justin Allgaier, who had made his way into the second position, had a brake fire which forced him off the track.

Because the drivers had already lined up for the restart, the NASCAR rule which states that drivers must stay in their lanes, went into effect.

This moved Brad Keselowski, who had been behind Allagaier in fourth, up to the second position.

Keselowski, who had been mid-pack for much of the race, was now in a position to make something happen.

On the restart, Keselowski quickly made his move, forcing Stenhouse Jr. high and taking the lead.

The race was under green for only two laps when Elliot Sadler spun out, collecting his teammate Austin Dillon, and ending their hopes for a top five finish.

Finally, on lap 202, the race was underway again but Keselowski held onto the lead to capture the victory.

After the race, Stenhouse Jr. was obviously disappointed saying, “It’s frustrating. I’ve been working on my restarts all year, but it got us tonight. Our car was pretty fast, but you couldn’t say it was dominant since we didn’t win the race.”

However, Keselowski gave Stenhouse Jr. credit for having the car to beat.

“I had a great short-run car that could give Ricky a run for his money.  If the race was two or three laps longer, I’m sure Ricky would have drove around us.”

Angela Campbell
A native of Charlotte, NC, Angela (Angie) was first introduced to racing by her father. An avid fan of NASCAR, she found a way to combine her love of racing with her passion for writing. Angie is also an award-winning member of the National Motorsports Press Association. Follow her on Twitter @angiecampbell_ for the latest NASCAR news and feature stories.
Previous articleKeselowski wins final Nationwide race at Lucas Oil Raceway
Next articleNHRA – John Force breaks another record in Sonoma qualifying