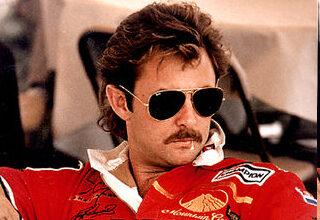 Every 10-30 years, a young driver comes along who shakes up the NASCAR world, and more time than naught, it’s usually these types of drivers that come into the sport with some kind of a racing background. [/media-credit]Tim Richmond was a lot different since he did not grow up with racing in his blood, and did not come from the hard working middle class lifestyle that most of NASCAR’s big names came from. Instead Richmond was born into wealth, and because of this, it would later turn out to be one of his biggest drawbacks because of his fast paced, Hollywood playboy lifestyle he lived throughout his racing career.

Since NASCAR was born on the back country roads of some of America’s most famous moon shining families, Richmond’s flamboyant lifestyle on and off the track clashed with the southern roots most fans were used seeing from their drivers.

Richmond’s standard of living along with his daily routine mirrored that of someone you would have thought was born and raised in California, unlike his hometown of Ashland, Ohio where he was born on June 7, 1955. The “lets party all night attitude” he chose to live by would be frowned upon by NASCAR, as Richmond would find out later during his short lived racing career.

Richmond was a hit with the fans as well as the ladies, and at times he would pull down his racing suit to sign autographs, which really got the women excited, but at the same time got the heads of NASCAR even angrier. NASCAR wasn’t ready for this type of driver to enter into their hallowed premier racing series, and it was only because Richmond’s driving style matched the lifestyle that he was living.

During his eight years as a Winston Cup driver which didn’t start until the age of 21, Richmond visited victory lane 13 times, along with 78 top-10 finishes in the 185 starts hr made in the series. Richmond collected a career-high seven wins in 1986 while driving the No. 25 Folgers-sponsored Hendrick Motorsports Chevrolet Monte Carlo, to go along with his 14 careers poles, and his very first victory coming on a road course in Riverside, California.

The 1986 season would be his best year driving in the Winston Cup series, finishing third in points behind eventual cup winner Dale Earnhardt Sr. Most of his fellow racers said that he was one of a few drivers who had guts enough to challenge Earnhardt and drive side by side with him. Richmond had a “take no prisoners” type of driving style which showed in the way he handled the road courses, and he was known as one of the few drivers who had the guts to challenge and race side by side with Earnhardt.

Richmond’s life was loosely portrayed in the movie Days of Thunder by the character of Cole Trickle, and aside from stock cars he also competed in open wheel racing finishing ninth in the 1980 Indianapolis 500. In 1986 at the height of a very promising career, his whole world came crashing down on him when he was diagnosed with A.I.D.S.

By the time 1987 rolled around, life would become even more challenging to his already troubled life, and it wasn’t until the middle of the season that he would return, and pick up back to back wins at Pocono and Riverside, and the win at Riverside would ultimately be his last. By the following year, NASCAR would step in and deal Richmond a very sour hand, when the organization would begin to treat him like he was some sort of drug addict.

NASCAR defamed his integrity by making him take a drug test because of his deteriorating health, and afterwards suspending him indefinitely because they said he had tested positive for a controlled substance.

Richmond demanded another test, and when those results came back…they were negative. NASCAR would later admit the first test that Richmond took was also negative; the only substance that showed up was Sudafed and Advil. Little by little NASCAR tried to not only defame Richmond, but they also wanted him out of the Cup series for good, and eventually they got their wish.

NASCAR would not let him race until he came up with all of his medical records, it was then Richmond filed a defamation of character lawsuit, but he would eventually withdraw it and leave the sport. Richmond would move back to Florida where he eventually died in 1989.

NASCAR to this day has not apologized for the brash and disrespectful way that Richmond was treated. In 1990, The New York Times reported that Dr. Forest Tennant, who was at that time the National Football League’s drug adviser, “falsified drug tests” that ultimately helped shorten Richmond’s NASCAR career.

Reporter Roberta Baskin stated that NASCAR had targeted Richmond, requesting that Tennant establish a substance-abuse policy with Richmond in mind. NASCAR chose not to mention any of these findings, and basically swept it under the rug with the, “We don’t see anything or what did we do wrong scenario?”

Richmond was one of their own, even though he didn’t fit the mold that NASCAR wants all of their drivers to follow, even though he was still a human being, breathing the same air as them, and also bringing money into their prestigious racing empire. Richmond would be inducted into the International Motorsports Hall of Fame in 2002, an award that not even the France family could ever take from him.

NASCAR would put the final nail in his coffin by only writing one line about him, and not including a single picture of him anywhere in the annals of NASCAR history. For those who chose to support and follow his career…Tim Richmond has been dearly missed, maybe not so much by NASCAR, but by the fans and drivers who stood next to him through thick and thin.

22 years ago we lost one of our own, but even today he is still in the hearts and minds of those who remember the impact he made to the sport, both on and off the track.