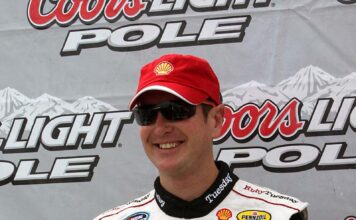 Busch’s speed of 123.241 was good enough to take the top starting spot for this afternoon’s Zippo 200 here at The Glen. The previous track record has only held up for one year as Macos Ambrose set fast lap last year in his NASCAR Nationwide Series Car with a speed of 122.410.

The top three qualifiers for this year’s Zippo 200 all were faster that Ambrose’s qualifying lap last year. The Busch brothers claimed the front row, with Carl Edwards starting third this afternoon.

Stay tuned throughout the day for more live updates from The Glen including, Sprint Cup Qualifying and Zippo 200 results!