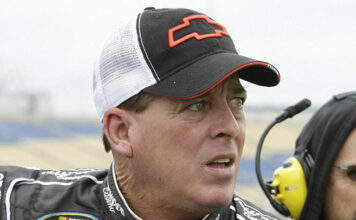 At the age of 53, Ron Hornaday won his 50th NASCAR Camping World Truck Series race at Kentucky Speedway on Saturday night.  While a lot of people focus on bringing forth that brand new young talent, an argument could be made that veteran experience is where it’s at. [/media-credit]The win marked his third of the season and puts him fifth in points, only 42 points behind Austin Dillon with five races left in the season. The focus on the series standings has been the young guns, Dillon, James Buescher and Timothy Peters, though here Hornaday is ready to capitalize as he’s done other years.

A veteran is also someone that a team can look at to lead them to victories and championships, without having to worry about going through the rookie, young-gun lessons of gaining that experience. However, team owners look beyond that as they want that youth for the future.

Following last season, Hornaday was a driver that many questioned wondered if he should hang it up after he finished seventh in points with only two wins. A season of bad luck and misfortune happens every once and awhile in a driver’s career as you can look at any driver who has been racing for a number of years and see this string.  Just the year before in 2009, Hornaday won the championship with six wins.

The comments made were like most in racing, who say that you’re latest results are the only ones who matter. While making those types of comments and articles, Hornaday’s four championships were forgotten along with the wins. On top of that, the strength of Hornaday’s team Kevin Harvick Incorporated (KHI) was misplaced amongst the talk.

Speaking of KHI, they announced last month that they would be shutting down operations at the end of the season as Kevin Harvick considered it a distraction. Truthfully, you could also argue that the issue of being able to find sponsorship in this economy probably played just as big as a factor.

Regardless, the announcement leaves Hornaday without a ride for 2012 with only a month and a half left in the 2011 season. Considering the success that Hornaday has had as of late, a ride is something that he should easily be able to find. However, it’s not a guarantee as Johnny Benson wasn’t able to find a ride and now finds himself back running at the short track level.

One scenario plays that Hornaday could find himself at Kyle Busch Motorsports, running a second truck for the team while Brian Ickler and Kyle Busch split the No. 18. It’s a scenario that has potential as Hornaday and Busch could work together to attract sponsors as Busch has proven that he has a strong team. Hornaday would also be an important asset to the KBM organization as he could possibly bring Busch his first driver’s championship.

Silly Season always brings out the best and worst scenarios like these and in the end, you will probably see Ron Hornaday find a ride or else there will be a lot of fans confused.

SM Staff
Previous articleHOORAHS AND WAZZUPS: DOVER DRAMA
Next articleCalled the Heart and Soul of the CWTS, Hornaday Will Have a Ride in 2012 … Right?