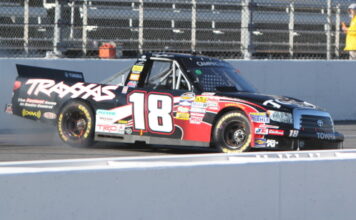 [/media-credit]Dillon’s car slid up the track coming out of the second turn on the final restart and Hamlin was able to get around Hornaday and Dillion to win his first NCTWS race in 12 starts in the No 18 Traxxas Toyota for Kyle Busch.

“It was great. Those guys, I know they were battling for the championship, so I didn’t want to put them in three -wide at any point, but it was just a gift right there into turns one and two.” Hamlin said.  “I have to thank Kyle (Busch) for letting me drive this truck. This is something that really means a lot to me to get my very first Truck Series victory.”

“We gave it to him. I just didn’t make the first turn and I ran into Ron. If I hadn’t done that it would have been one of us in victory lane. I’ve just got to figure out how to make that first turn better on restarts.” Dillion said.

“It was a great day … a pretty cool day for us. Austin raced me pretty hard at the end. I don’t know how Denny snuck through us and stole the win.” Hornaday said.

Barry Alberthttp://www.speedwaymedia.com
Previous articleKeys For Success — Martinsville
Next articleBrad Keselowski Opens Up About Integrity, Ethics and Where Penske Stands

Myatt Snider in his No.2 Richard Childress Racing Chevrolet brought his car to the Checkered Flag in first place, winning it the hard way, in double overtime, in his 39th start. For two consecutive weeks, the NASCAR Xfinity Series has had first-time winners.
Read more