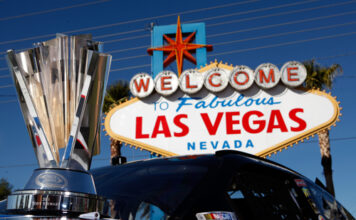 There’s Even A Bite Of ‘The Big Apple,’ Where He Celebrated Two Previous Titles [/media-credit]It’s Stewart’s first NASCAR Sprint Cup Series Champion’s Week in Las Vegas. His 2002 and 2005 titles were celebrated in New York City. There was perhaps a bit of déjà vu during Tuesday’s annual Landmark Photo Shoot, with the faux Big Apple skyline of New York, New York appearing as background in one of the shots.

“There’s so much to do here in Las Vegas,” said Stewart. “It’s the perfect place to have the year-end celebration. I look forward to having everyone from the Stewart-Haas Racing team, Office Depot and Mobil 1 here on Thursday night and spending some time with them.”

Stewart hit a number of notable Las Vegas photo op hot spots for the traditional photo shoot. On this year’s agenda: the “Welcome to Las Vegas” sign, the iconic lion outside the MGM Grand Hotel and an evening shoot at the Foundation Room in the House of Blues at Mandalay Bay, which overlooks the Las Vegas strip.

All photos from today’s shoot can be viewed and downloaded at www.nascarmedia.com.

No surprise – Stewart admits to being a bit winded during his cross-country championship festivities that followed his Nov. 20 Chase for the NASCAR Sprint Cup™ victory at Homestead-Miami Speedway.

Miss Sprint Cup, Monica Palumbo, accompanied the champion on his Las Vegas media rounds and suggested Stewart “had better be on your game this week” because it will be a busy four days, culminating with the NASCAR Sprint Cup Awards Banquet on Friday night at The Wynn Resort.

Tuesday also marked the opening day of the NASCAR Motorsports Marketing Forum being sponsored for the 12th year by Street & Smith’s Sports Business Journal. The conference, featuring an array of insight from sports and marketing executives from within and outside the motorsports industry, continues Wednesday at Caesars Palace. Stewart was interviewed to open the two-day event. Among the attendees and panelists were NASCAR Chief Marketing Officer Steve Phelps, Chief Operating Officer of NASCAR Media Group Jay Abraham and NASCAR Managing Director, Entertainment Marketing and Business Development Zane Stoddard. Dylan Kwasniewski and Darrell Wallace Jr., two of NASCAR’s stars of the future, were also among first-day participants.

· Las Vegas Motor Speedway’s Champion’s Week Kickoff Event: Held on Fremont Street, this free event starts at 2:15 p.m. and will feature a Newlywed Game-type competition among the top-12 drivers. Drivers will be paired in groups of two, and will answer questions about each other mirroring the famous Newlywed Game style. Fans can watch the event on NASCAR.COM via this link: http://www.nascar.com/champions_week_kick_off.

· NASCAR NMPA Myers Brothers Awards Luncheon: Beginning at 11 a.m. in the Bellagio Ballroom at the Bellagio, this annual industry/media gathering includes the presentation of awards to the Champion Crew Chief (Darian Grubb), Champion Sponsor (Office Depot and Mobil 1), Sunoco Rookie of the Year (Andy Lally) and Most Popular Driver (to be announced). Co-hosted by NASCAR and the National Motor Sports Press Association, fans can attend this exclusive event for the second-consecutive year. Fans can watch the event on NASCAR.COM via this link: http://www.nascar.com/Myers_Brothers_Luncheon.

· NASCAR After the Lap: Starting at 4:30 p.m., NASCAR After The Lap is one of the highlights of NASCAR Sprint Cup Series Champion’s Week. Tickets for the third-annual event will be available for purchase at www.NASCARAfterTheLap.com for $20 each, with proceeds benefitting The NASCAR Foundation, a non-profit organization which raises funds that support children’s charities and important causes throughout the nation. Sponsored by Ford Motor Company and Coca-Cola, the event is renowned for its unfiltered, “tell-all” format featuring the 2011 top-12 NASCAR Sprint Cup Series drivers. Fans can watch the event on NASCAR.COM via this link: http://www.nascar.com/After_The_Lap

• Sixteen-year-old Ella Mae Bowen is an emerging country singer-songwriter who is featured on the new “Footloose” soundtrack with her enthralling remake of “Holding Out For a Hero”. Bowen is originally from Walhalla, South Carolina, and is currently signed with Big Machine Label Group, which is the record label home to country superstars like Reba, Taylor Swift and Martina McBride. Click here for a photo of Bowen.

• “Jersey Boys” is the smash-hit musical winner of the 2006 Tony Award on Broadway and Best Musical accolades in both London and Australia. This critically-acclaimed musical tells the tale of four blue-collar boys working their way from the streets of Newark to the top of the charts taking audiences behind the music of Frankie Valli and The Four Seasons. Jersey Boys, voted #1 show in Las Vegas by the Las Vegas Review Journal, is currently performing at The Palazzo and is coming to Paris Las Vegas in March 2012. Click here for a photo of Jersey Boys.