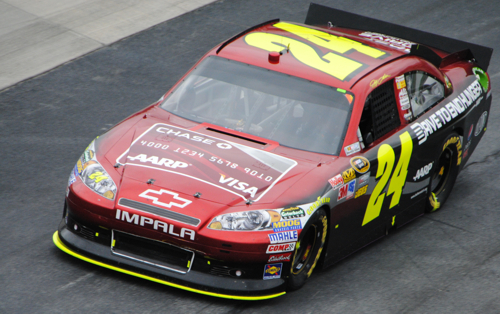 While Jeff Gordon, as well as the rest of his NASCAR colleagues, may be enjoying Christmas with family and friends, his sponsor, the AARP Foundation’s Drive to End Hunger campaign, is taking no holiday. [/media-credit]“An estimated 8.8 million Americans, 50 and older, are at risk of hunger, including 4.9 million 50- to 59-year olds,” AARP Foundation President Jo Ann Jenkins said. “The holiday season is here but there is no off-season in the fight to help people facing hunger.”

Earlier this year, AARP became NASCAR’s first cause-based primary sponsor, featuring its Drive to End Hunger on Jeff Gordon’s No. 24 Hendrick Motorsports Chevrolet. The primary purpose of the sponsorship is to not only raise the visibility of the issue of hunger, but also to raise cash and donations in NASCAR venues throughout the country.

“We have just really enjoyed a wonderful working relationship with Jeff Gordon and Hendrick Motorsports as part of our entrée into the NASCAR world,” Jenkins said. “When we really thought about putting this whole campaign together, we said we didn’t want to have partners who didn’t really believe in solving the issue of hunger in this country.”

“I really believe that we can make a sizable dent in solving this issue, especially for those who are 50 years or older and vulnerable,” Jenkins continued. “So, we entered into this relationship with Jeff and agreed that it was going to be the Drive to End Hunger car because it really was going to be all about ending hunger.  And all of the proceeds were going to go to helping this issue.”

Being new to the NASCAR scene, Jenkins admitted that AARP were tremendously fortunate to partner with one of the sport’s biggest names.

“It didn’t hurt that Jeff has won a number of races and that he is the eighth most popular sports figure in this country,” Jenkins said. “He has really embraced this whole cause, doing it not only when we ask him to but when he is talking about his own charities. So, it’s really worked out well for us.”

The other surprise for the AARP Foundation has been the success of not only raising awareness of the issue of hunger, but also raising dollars that turn immediately into food for those in need. The most overwhelming aspect of the Foundation sponsorship, however, has been learning just how generous NASCAR fans really are.

“Our goal for this year was to raise awareness and to raise funds,” Jenkins said. “We have tried to gear our awareness campaign to help local nonprofits and soup kitchens get what they need to solve this issue.”

“So far this year, we have raised over $14 million in commitments, in cash, donations or multi-year commitments from corporations,” Jenkins continued. “Almost 25% of that has come from individual donor contributions which is amazing.”

“We’ve reached over 123,000 NASCAR fans at our interactive tents at races around the country,” Jenkins said. “Almost 32 million people have been engaged with us in some sort of social media. So, we couldn’t be more happy with the results.”

“This was our first entrée into the sport and it has exceeded any of our expectations,” Jenkins continued. “The NASCAR fans really understand the issue of hunger and have embraced that.”

“The first thing they ask is how they can help,” Jenkins said. “Individuals really can make a contribution to ending hunger and I think we’ve hit it out of the ball park with our work with NASCAR and Jeff Gordon.”

Now that the first season for the AARP Foundation’s Drive to End Hunger campaign is in the books, the AARP Foundation is looking forward to seeing what next year has in store for their partnership with Jeff Gordon and Hendrick Motorsports.

“We’re excited about the 2012 racing season and we’re putting the plans in place as to how we can continue to do what we’ve done in 2011 but engage even more people at the tracks on our platform next year,” Jenkins said. “We’re going to try a number of fundraising events at the tracks and we’re also going to be working with our AARP State offices, getting them to engage in hunger campaigns.”

“We’re also expanding our partnerships with other nonprofits,” Jenkins continued. “Today we signed off on eight to ten innovation grants going to other nonprofits who think they have a sustainable solution to solving the issue of hunger.”

“Our goal is to amplify the work of nonprofits and the community in solving the issue of hunger.”

Although the 2012 season is right around the corner, the AARP Foundation is working especially hard over the Christmas break and off-season to ensure that all NASCAR fans understand that hunger takes no holiday.

“We are working right now on keeping the message alive,” Jenkins said. “We’re updating our Drive to End Hunger website on a daily basis.”

“We’re pushing out a new YouTube channel focused on Drive to End Hunger,” Jenkins continued. “We’re engaged in a pilot program in Georgia to simplify the SNAP application for Food Stamps, especially for the senior population.”

“There isn’t much of an off-season with NASCAR but we’re already engaged with Jeff and the folks at Hendrick with what we’re going to be doing starting early February to kick off the season,” Jenkins said. “We’re excited about it.”

The message of the AARP Foundation for the holidays is simple.

“The good thing about this Drive to End Hunger campaign is that each person can make a difference,” Jenkins said. “We know that if we give $1 to a local food bank, they can turn that into $7 in food by purchasing in bulk.”

“In this holiday season, when so many are in need, people really can make a difference.”

For more information about Jeff Gordon’s partnership with the AARP Foundation and the Drive to End Hunger campaign, visit .