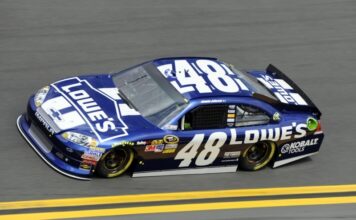 [/media-credit]It must have been a full moon. I didn’t go because it’s a long way from West Virginia to the R&D Center and mostly because I knew what the verdict was before they announced it. Rarely does the NASCAR Appeal Board, or whatever they call it these days, overturn anything, especially when the defendants are caught red-handed. The circus continued regardless.

Reports I heard said reporters arrived at the designated place as early as 7:00 AM. When it got past noon, people bought food for the reporters, with Landon Cassill bringing Burger King (his sponsor) bringing treats to the faithful. Later on Lugnut, the Charlotte Motor Speedway mascot showed up to entertain. Never in the history of a hearing was so much done for so many. In the end, the penalty to Chad Knaus and the No. 48 team stayed the same, just as I expected. Rick Hendrick declared his disbelief at the verdict and vowed to take it to the next level. In the meantime, if the hearing with the head man is taken next week, it means Knaus would miss Fontana through Talladega, but the big issue is whether or not it would make a difference in the team.

Knaus would be able to set up the car, discuss changes to the car through cellular phone conversations, and everyone knows the team is so talented, it really won’t make a difference—not much anyway. The big issue is the points penalty. There is not a chance in hades that that will go away, so you have to wonder what in the world Rick Hendrick is thinking. The best that can happen, if history is any indication (and many think that the fact that the head officer is a former GM employee think this is probably what will happen), is a reduction of the suspensions of Knaus and the car chief. Why drag this out? Only Rick, the top owner in the series, knows. The penalty could be reduced, but it’s not likely, and it probably doesn’t matter anyway. The No. 48 team will make up the deficit, land in the top 10 and do its usual thing in the Chase. And yet, it was made into a circus maybe because it was Rick Hendrick and the five-time champ. Or maybe it was because it was an event and NASCAR has never avoided an event. We will know soon what the verdict is, but why all the drama?

Finally, Chevrolet kind of announced today that they won’t show their stock car for 2013 until later. Ford and Dodge, even though Dodge doesn’t know who will be campaigning the car, have already shown their car. Toyota and Chevrolet have not. Chevrolet said it will be a new nameplate—many think it will be the new Chevelle, built in Australia by Holden. I have to wonder how red-blooded American fans will react to their favorite, Dale Earnhardt, Jr., and other Chevy drivers driving a foreign car. It probably won’t make any difference. Fusions are made in Mexico and many Chargers are made in Canada. If they indeed run the Chevelle, people will accept the foreign car just like they did the Camry.

So, we’re not even at midweek and everyone’s all excited. In a couple of days, we head to Bristol, once the highlight of March. The change in the track configuration has lessened that some, but still a great to watch a race. Chad will be on the pit box for now and Trevor Bayne will not be there at his home track, but I have to hope that the circus over one team will not take away from the others and we see a great race. It’s going to be a tough act to follow, you know. I mean, Lugnut and a horde of reporters are hard to beat. But, for now, we have a race to win and the lawyers and protests are in the background. Until next week.

Ron Fleshmanhttp://www.ris-news.com
Ron Fleshman has followed NASCAR racing since attending his first race at Martinsville Speedway in 1964. He joined the Motor Sports Forum on the CompuServe network in the 1980s and became a reporter for Racing Information Systems in 1994. In 2002, he was named NASCAR Editor for RIS when it appeared on the World Wide Web as www.motorsportsforum.com. He can now be found at www.ris-news.com. Ron is a member of the American Auto Racing Writers and Broadcasters Association. You can find Ron following and reporting on the top three NASCAR divisions each week. As a lifer in his support of racing, he attends and reports on nearly 30 events a year and as a member of the motor sports media, his passion has been racing for 47 years. He lives with his family in rural West Virginia and works in the insurance industry when not on the road to another track.
Previous article
The Final Word – Tony was a tiger at Las Vegas, Petty was a tiger on SPEED
Next article
Brian Vickers, No. 55 Aaron’s Dream Machine, Bristol Preview