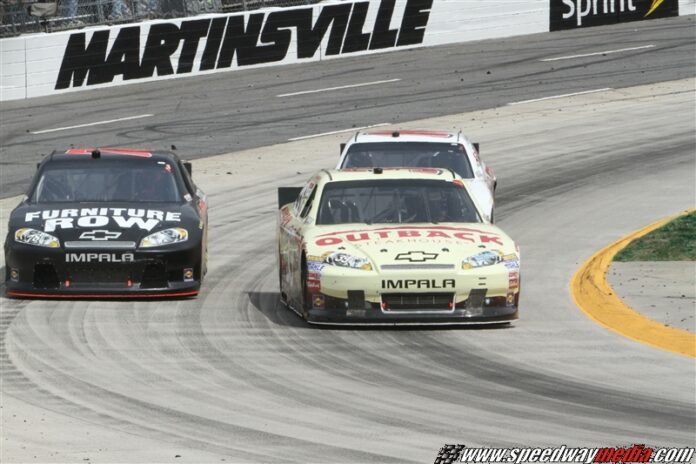 [/media-credit]Martinsville might have started a wee bit boring, got real interesting in the second half, then went plain nuts at the end. Jeff Gordon, the star on this day, was leading, trying to fend off team-mate Jimmie Johnson for the win with three laps remaining, while Dale Earnhardt Jr was sitting third. Rick Hendrick was about to celebrate his 200th Cup victory as an owner when David Reutimann happened.

With his car laps down and running about as fast as one of those motorized wheelchairs, Reutimann ignored the pit entrance not once but twice before getting black flagged. That is when he parked the car on the track, brought out the caution, and forced a green-white-checker finish. Everybody pitted, except for Gordon and Johnson, the two leaders could not get going with their old tires, and they got spun out of the way to bring out a final yellow flag. This time, Ryan Newman duelled A.J. Allmendinger for the win, Junior retained third, Gordon 14th, and Johnson finished 12th.

So, what in hell was going on in the head of Reutimann? Well, when the car all but died, he tried to pad an extra lap or two to try for the points needed to keep the car in the Top 35 in points, to ensure its participation in the next race. Remember, this is the car Danica Patrick is scheduled to drive for ten events this season, and they want her in the races without having to be a go or go home entry. It was laps down and had been ailing for some time, including the development of some engine issues. When Reutimann got black flagged, the car died, refused to refire, which brought out the caution that changed everything.

The official line was that Reutimann limped around to try to gain an extra lap or two so they might stay in the Top 35. The trouble is they had no chance of making up the one point they currently trail the #83 driven by Landon Cassill, which wound up more than 70 laps up on them. The same goes for the #33 Hermie Sadler was driving, which wound up 69 laps ahead and five points better in 34th place in owner’s points. So, they not only stayed out for no reason at all, they want us to believe Reutimann did the calculation in his own head, and on his own decided to stay out there. Really?

Usually when the driver does something that appears so stupid it means one of two things. First, the guy is either a total idiot or just a jerk who wanted to screw somebody real bad. Personally, I have never heard of anyone accusing Reutimann of being such a driver or a man. Second, the one I would be betting on, is that the driver got orders to stay out from someone who simply has the math skills of a three year old. When it came time to face the music before the FOX and SPEED cameras, there by his lonesome was David Reutimann. He did not say he was ordered to do anything, he did not throw anyone under the bus, he just took the responsibility that I doubt was really his. He took it like a man, but I am wondering just where in hell owner and crew chief Tommy Baldwin was when it came time to man up?

We all know somebody did something mighty stupid last Sunday. What we don’t know for sure is exactly who that person was.  If nothing else, it will give us something to talk about before they head to Texas. Enjoy the next couple of weeks.