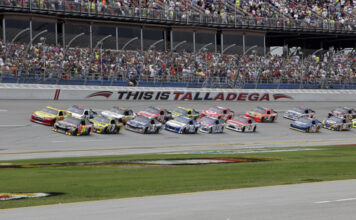 [/media-credit]When NASCAR comes to Talladega it’s almost like playing the lottery; you never know who is going to win, but it’s still fun to gamble. Jeff Gordon started on the pole with last year’s champion Tony Stewart on the outside pole. The race was delayed for about 30 minutes due to rain that flooded the track overnight, but once the race got started it was an entertaining show.

Overheating started out early on Lap 16 when Regan Smith blew an engine to bring out the caution flag. Tony Stewart, who was leading when the caution came out, got off pit road second to Matt Kenseth. Kenseth was able to hold the lead until Lap 26 when Michael Waltrip took his No. 55 Toyota to the lead.

The overheating woes continued on Lap 44 when Ryan Newman took his car to the garage when water began to pour out of his windshield. The top three drivers under this caution were Waltrip, Kenseth, and Stewart. At Talladega a driver can go from the rear of the field to the front instantly with the help of the two car tandem and that’s exactly what Jimmie Johnson did on Lap 46 with the help of his teammate Dale Earnhardt Jr. and Kurt Busch.

Kenseth took the lead in his Best Buy Ford on Lap 53 with Jeff Gordon in tow. Around this time is when Johnson reported to the team that his engine was blowing up due to overheating.  After green-flag pit stops on Lap 58 Earnhardt took over the lead from Kenseth for about 20 laps, until Earnhardt lost the draft and dropped back to 15th position. Approximately 50 laps into the race Kasey Kahne was forced to make a spotter change. His interim spotter Kevin Hamlin was suffering from laryngitis at the time and eventually lost his voice. The No. 5 team replaced Hamlin with Joe Nemecheck’s spotter to finish the race.

From 80 laps to go on, the leader of the race changed almost every ten laps. The drivers exchanging the lead were Greg Biffle, Kasey Kahne, Kenseth, Casey Mears, Brad Keselowski, and Kurt Busch.  Busch caught a big break on Lap 141 when his car ran out of fuel just as caution flew on the race track. In Turns 3 and 4 the big one struck involving Landon Cassill, Jeff Gordon, Carl Edwards, Martin Truex Jr., Joey Logano, Juan Montoya, Terry Labonte, Aric Almirola, and Dave Blaney. Under this caution Kenseth and Ambrose were penalized for pitting too soon. Kurt Busch and Bobby Labonte also pitted too soon after running out of fuel.

Paul Menard led the restart with Keselowski on his outside. Keselowski took the lead with 39 to go. Mears spun his race car in Turn 3 to bring out a caution with 15 laps to go. During this caution Stewart brought his car down pit road for overheating issues. The cautions continued when former teammates Keselowski and Kurt Busch got together, sending Busch spinning through the infield.

As the field attempted to restart, another caution flew once again. Hamlin jumped out of line to try and make it three wide down the middle. Allmendinger blocked Hamlin and started another big wreck. Menard, Kevin Harvick, and Waltrip were also involved. Just before the restart Hamlin blew a tire causing the caution to be extended for debris on the track.

The race was settled by a green-white-checkered finish between Kenseth, Keselowski, and Kyle Busch. Keselowski pulled ahead by three car-lengths over the field to win his second race at Talladega. [/media-credit]Kurt Busch, or Should I Say “Ricky Bobby”?

Kurt Busch’s paint scheme for Talladega looked very familiar to race fans, and even non-race fans. Busch ran the colors of “ME” from the popular movie “Talladega Nights”. Not only did he run Ricky Bobby’s paint scheme, his entire team took this role to a whole different level. The team referred to Busch as “Ricky” over the radio and quoted the movie throughout the entire race. The team even carried a stuffed animal cougar named “Karen” in the racecar with them.

Busch’s race was going very well until Lap 181 when Keselowski and Busch got together, sending Busch sliding across the start-finish line. With limited damage to his race car, it looked as if Busch would be able to get back on track and continue racing. However, when Busch drove his car down pit road backwards in attempt to get to his pit stall, he was forced to pit again. This is when the fun and games ended between the team and driver, and the No. 51 car finished in 20th place, one lap down.

Fresh Faces Finish in the Top-20

After losing his Cup ride at Roush Racing last season, it was nice to see David Ragan finish in 7th position. Ragan ran a clean race and was able to stay out of trouble to keep his No. 34 Front Row Motorsports Ford in the Top-10. Trevor Bayne is running a part-time NASCAR schedule this season due to lack of sponsorship with Wood Brother’s Racing. Bayne is known for being a good plate-track racer and he finished in 8th position in the Aaron’s 499. Aric Almirola is another driver who we don’t normally see at the top of the field, but was able to finish in 12th position. David Gilliland, who is Ragan’s teammate at Front Row Motorsports, finished in 13th position. Travis Kvapil, who is running a par-time schedule, finished in 16th position.

SM Staff
Previous article
What It Was, Wasn’t Racing – Part Deux
Next article
Penske sticking with Keselowski: ‘I wouldn’t trade him for anybody’