What It Was, Wasn’t Racing – Part Deux 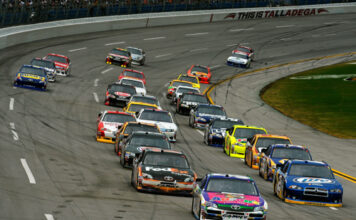 [/media-credit]Restrictor plate racing is not racing. You have read it here from me for a long time, but rarely do we hear it from the competitors. Often, we hear lots of non-comments from the drivers which usually consist of utterings like, “that’s Talladega” or “this is the way it is.” That wasn’t so on this weekend. The family that is NASCAR had already seen Eric McClure go head on into a wall and get helicoptered to a hospital. And then the last third of the Aaron’s 499 became a mockery of what NASCAR racing has been and further proof that there is just something wrong here.

It was not surprising that Mark Martin did not enter this race. He has quietly expressed his displeasure with this type of racing. There are several others, but it’s a fact of life that if you want to compete for the Sprint Cup Championship, you have to race at Daytona and Talladega. Luckily for him, Martin isn’t interested in that anymore, even though he came so close so many times, He was hosting his fan appreciation event in Arkansas, but what of those participating?

Jeff Gordon, who retired his car early, had a gripe about the overheating that was the rule in the race. This was an attempt by NASCAR to break up the two car tandems and go back to pack racing, which fans said they preferred. He said NASCAR should look at that. We’ll see. But the most interesting comments came from Sprint Cup Champ Tony Stewart. His press conference had to be the most unusual I’ve ever witnessed. He said (paraphrasing here) that there were not enough cars wrecked during the race and that the race should be extended if half the cars had not been wrecked. Further, he said that a figure-eight change to Talladega SuperSpeedway might be in order to assure that enough wrecks happened to please the fans.

Tony probably had his tongue firmly planted in his cheek, but the point was well taken. Ever since Bobby Allison got lifted into the fence at Talladega, restrictor plates have been the rule and I don’t see anything to change that now. Never mind that there might be solutions other than restrictor plates to the problem, this is what we have to deal with. Drivers hate these races, more Talladega than Daytona, but it matters not. This is what we have to deal with.

Restrictor plate racing gives the fans an unnatural atmosphere. Racing has its good cars and it’s bad. In a perfect world, the good cars go to the front and the bad cars don’t. Daytona and Talladega lets everyone play. It doesn’t matter if you are good or bad, you can win. It’s a noble idea. Just ask David Ragan, a guy who doesn’t have a chance at most tracks, but was in the mix for the win Sunday. Of course he had a big time ride last year and nearly won at both Daytona and Talladega, but this year, he’s driving for the underfunded Front Row Racing team, and yet he was up front and looking good because of his skill.

I agree with the champ. We have tried to make NASCAR like football, basketball, and baseball. It’s just cannot be done. Racing is racing and has nothing to do with sticks and balls. Despite all the changes, and by that I mean the Lucky Dog, wave around, and double file restarts, attendance continues to decline and TV rating continue to do the same. Maybe it’s time to make some real changes at Daytona and Talladega and look at what we aren’t. We aren’t football, basketball, and baseball. Recent surveys indicate that folks hate the Chase—about 75% of them. Maybe it’s time to go back to racing, No contrived rules (and that includes restrictor plates—find a real solution) and the realization that we are different from the other sports. It’s a unique perspective, I know, and one I don’t ever expect anyone to endorse, but I can dream.

Ron Fleshmanhttp://www.ris-news.com
Ron Fleshman has followed NASCAR racing since attending his first race at Martinsville Speedway in 1964. He joined the Motor Sports Forum on the CompuServe network in the 1980s and became a reporter for Racing Information Systems in 1994. In 2002, he was named NASCAR Editor for RIS when it appeared on the World Wide Web as www.motorsportsforum.com. He can now be found at www.ris-news.com. Ron is a member of the American Auto Racing Writers and Broadcasters Association. You can find Ron following and reporting on the top three NASCAR divisions each week. As a lifer in his support of racing, he attends and reports on nearly 30 events a year and as a member of the motor sports media, his passion has been racing for 47 years. He lives with his family in rural West Virginia and works in the insurance industry when not on the road to another track.
Previous article
Roger Penske has the perfect race at Talladega Superspeedway
Next article
Aaron’s 499 Review: Talladega Puts On a Show