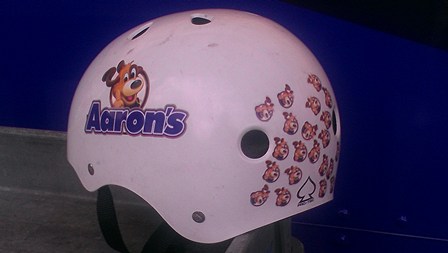 CORNELIUS, N.C. –  Few weeks in the 10-month NASCAR Sprint Cup season put as great of a spotlight on pit crew members as the next two weeks at Charlotte Motor Speedway.

“I’m a big fan of Ohio State football and have always liked the way the coaches reward big plays with buckeye stickers on the helmets,” said MWR’s pit coach Greg Miller. “We wanted to do something to reward the guys when they do something special on the crew.”

Miller awards stickers to each crew member for the following:

“I don’t know if it provides any extra motivation,” said No. 55 Aaron’s Dream Machine gas man Brian Dheel. “You want to do your job each week, but it’s nice to have a system to reward achievement.”

Achievement is certainly on the minds of pit crew members during the next two weeks.

On Thursday in Charlotte, the eighth-annual Sprint Pit Crew Challenge features the top 24 crews in the sport in a head-to-head competition to determine the best six-member crew. The event awarded more than $260,000 in 2011.

“It isn’t as pressure packed as it is on race days,” said No. 56 front tire changer Eric Maycroft. “It’s more about having fun with a pretty big payoff.”

The pressure comes the next night when a mandatory four-tire pit stop is part of qualifying for the NASCAR All Star Race.

“It’s one of the most pressure-packed pit stops of the year,” Dheel said. “That stop contributes to where you start the All Star race. You are it. There are no others stops going on at the time. It’s really easy to see if you make a mistake or if you do really well.”

All of this on top of Saturday’s All-Star race and the 600-mile race on May 27th.

“There’s never been a time in NASCAR when pit stops are as crucial as they are now,” said driver Mark Martin.

“That’s why the teams put so much into the training and recruiting of these pit crews. I have the best pit crew I’ve ever had right now. These guys are so key to a team’s success and deserve much attention.”

MARK MARTIN: “The All-Star race is just a great race. I really love it. It’s going to be a lot of fun – it’s just a great time. Any time you get to race in Charlotte it’s good. It’s really a break from counting points plus it’s a lot of fun and excitement. You race for a big trophy and a big check. It’s also special because it is in Charlotte. It wouldn’t be what it is anywhere else. Charlotte is home for almost all these teams and it’s the place for this race.”

·      PIT STOP COMPETITION: The 2012 NASCAR Sprint Pit Crew Challenge is a family-friendly, pit-crew competition featuring the top-24 NASCAR Sprint Cup Series pit crews in a head-to-head competition to determine individual and team champions. Tickets start at $15 and can be purchased online at www.pitcrewchallenge.com or by calling the Time Warner Cable Arena box office at (800) 745-3000. Event begins Thursday at 7 p.m. ET with doors opening at 5:30 p.m.

·      MWR FAN FEST: Michael Waltrip Racing will hold its sixth annual Fan Fest at its race shop in Cornelius, N.C. on Wednesday, May 23. MWR NASCAR Sprint Cup drivers Martin Truex Jr., Mark Martin and Clint Bowyer will sign autographs from 1-3 p.m. Up to 300 wrist bands for each driver will be distributed on a first-come, first-serve basis at 9 a.m. on Monday, May 21 in the MWR team store. A wrist band is required for an autograph. Wrist band distribution is limited to one band per fan per day until all bands have been distributed. No purchase required to obtain a wrist band. Team business partners plan to bring interactive displays and SiriusXM Radio will broadcast from MWR. Music, a free poster, prizes and the MWR transporters will also be part of this year’s event. Food will be available for purchase. Due to out-of-state commitments, Waltrip and Brian Vickers will not be present.

·      HELP A TRUCK DRIVER: You can give No. 55 truck driver Glen Shano a second chance to compete in the 2012 Freightliner Run Smart Hauler Challenge and another shot at the $30,000 prize. Vote for Shano by clicking here or by visiting the Freightliner Truck Hauler Challenge page on Facebook. Last year Shano finished second in the competition, but he was eliminated this year. The eliminated driver with the highest number of Facebook page votes is automatically reinstated.

·         CHASSIS: Martin will drive Chassis 722 on Saturday in the All Star Race. It finished fifth with Brian Vickers behind the wheel at Bristol on March 18. Chassis 708 will serve as the backup and has not raced in 2012.

DIECAST CARS: No. 55 diecast cars are now available at the MWR souvenir hauler or CLICK HERE

AARON’S: Right now during Aaron’s 2000th Store Celebration you are pre-approved for up to $2000 in merchandise.*  Aaron’s is your trusted source for quality lease to own furniture, electronics, appliances & computers at guaranteed low prices. Shop at your nearest Aaron’s store location or Aarons.com to view our lease-to-own products, including dining room tables, TVs, tablets, appliances, computers & more…*PRE-APPROVAL minimum requirements include, but are not limited to, a source of income, a place to live and 3 references.