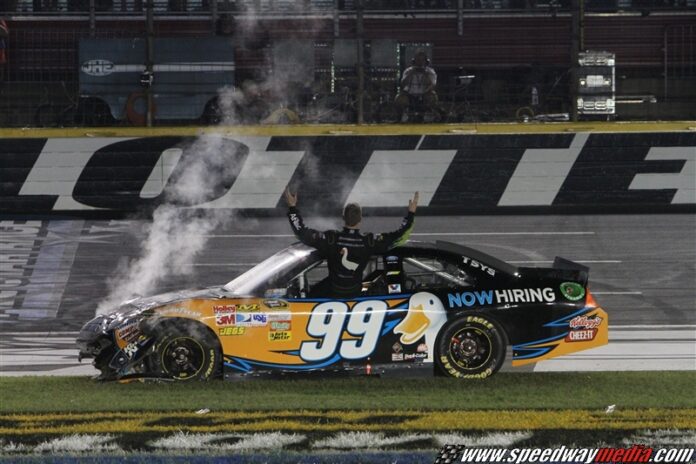 [/media-credit]2007: The 2007 Nextel All-Star Challenge featured some fireworks along with a first time All-Star Race Winner in Kevin Harvick. Kenny Wallace won the fan vote spot in the race and Martin Truex Jr. and Johnny Sauter raced their way into the Nextel All-Star Challenge from the Nextel Open. Fireworks went off when the Busch Brothers were both involved in a wreck. At this time Kyle Busch was still driving the No.5 Kellogg’s car for Hendrick Motorsports and Kurt Busch was in the No.2 Miller Lite Dodge for Penske Racing. Going into turn one, Kyle got loose and spun up track into Kurt. Both drivers made heavy contact with the wall. Kevin Harvick went on to win the race.

2009: This was the twenty-fifth anniversary of the All-Star Race. Some format changes for the 2009 race included the first quarter of the race being fifty laps with a mandatory pit stop on lap twenty five. Then there would be two twenty lap segments then a ten lap shootout for the finish. Sam Hornish Jr. and Jamie McMurray raced their way into the All-Star Race via the Sprint Showdown. Joey Logan won the fan vote. In the race, with eight laps to go, Jeff Gordon, Kyle Busch, Ryan Newman went three wide for the lead coming out of turn four. When Gordon got up into Busch, Busch got loose and up into Newman putting Newman into the wall and bouncing Busch down into Gordon spinning Gordon through the infield and eventually Gordon went nose first into the outside wall. Tony Stewart went on to win the race; this was Stewart’s first win driving for his own team, Stewart-Hass Racing.

2010: The 2010 All-Star race would be shown on SPEED TV for the first time. A new rule for the 2010 All-Star Race was a mandated four tire pit stop for all teams needed to make before the final fourth segment. Martin Truex Jr. and Greg Biffle raced their way into the All-Star Race from the Sprint Showdown. Carl Edwards won the Sprint Fan Vote. The “Big One” occurred on a restart when Joey Logano made slight contact with Mark Martin, Martin then spun out right in front of the field. Martin slid down the track collecting David Reutimann first. Also involved in the wreck were; Jeff Gordon, Jamie McMurray, Carl Edwards, Tony Stewart and Dale Earnhardt Jr. With eight to go in the final segment, Kyle Busch was racing Denny Hamlin when Hamlin cut him off exiting turn two, Busch got into the wall and ending his chances of winning the race.  Finally with two to go, Kyle Busch got into the wall at the end of the front stretch. Busch then bounced off the wall and got into Kahne turning Kahne into the wall bringing out the caution. After the restart Kurt Busch went on to win his first All-Star Race. [/media-credit]2011: Carl Edwards would go on and win the 2011 Sprint All-Star Race. The race featured few cautions. David Ragan and Brad Keselowski advanced to the All-Star Race from the Sprint Showdown and Dale Earnhardt Jr. won the Sprint Fan Vote. Late in the All-Star race Kyle Busch began to catch Edwards but came up short and Edwards went on to win the race. During his celebration, Edwards spun through the grass attempting to do a burn out when his car met a drainer in the infield; Edwards heavily damaged his front end.