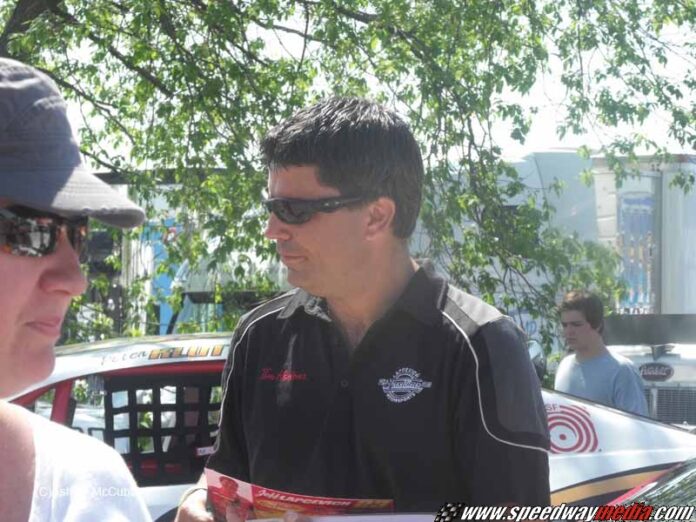 [/media-credit]With the first race of 12 in the books for the NASCAR Canadian Tire Series, the season is off and running. Jeff Lapcevich was one of the drivers who ran the Vortex Brake Pads 200 at Canadian Tire Motorsport Park and was able to come home with an eighth place finish after pit road problems.

Before the race started, Lapcevich was looking forward to running CTMP as it has always been his favourite track. In his three previous starts on the 2.36 mile road course, he had finished in the top 10. Outside of NASCAR, success had come to Lapcevich at CTMP as he won a 24-hour race there in 1995.

“We’re a little off the pace right now, but it’s a long race and we usually race well better than we qualify so looking forward to it,” he said before the race.

Once the race started, Lapcevich would keep himself in the midst of contention, till a mid-race pit stop would set him back. On the stop, the gas man wouldn’t get the gas can out of the back of the car and Lapcevich would drive the No. 23 Tim Hortons, Cathcart Trucking and Castrol Dodge off pit road with the can still in hand. The gas can would fall out in turn five and result in NASCAR calling Lapcevich back down pit road for a stop and go penalty.

A caution would allow Lapcevich to make up the lost time and was battling amongst the top five, before having to make a last-race pit stop under a late race caution due to a flat tire. Lapcevich was able to drive from where he started near the back to eighth before the 51-lap race was over.

Moving forward towards the rest of this year, this will mark Lapcevich’s first time running the full NASCAR Canadian Tire Series schedule, after missing the races out west the last three years. Lapcevich says he’s excited about going out to tracks that he has never raced at before out west.

“I’m excited about it,” he says. “We’ve changed a lot of things this year. We’ve revamped both the road course and oval car, a lot of new crew members.”

The goal this season is this year for the Grimsby, Ontario driver is simple – win the championship.

“If we didn’t think we could, I wouldn’t bother putting in the effort, the money that it takes to do this,” he says. “That’s what we set the goal at.”

He also adds that he would like to win some races, noting that he has a good chance to pick some wins on the road courses.

“I think we have as good a chance as anybody to win those ones,” he comments. “We’ve been decent on the ovals in the past. If we finish the season without a win, I will consider the year a disappointment.” [/media-credit]Lapcevich got started in racing through his father as his dad raced at Speedway Park, a dirt track up in the Hamilton area in the 1960s. When Lapcevich was about 12 years old, his dad got back behind the wheel.

“He got back in it at Flamboro and he raced there for a few years,” he says. “Then he got into road racing, as I became 15 or 16. I started working on his crew.”

Soon after, his dad hung up the helmet and allowed Lapcevich to drive. Lapcevich has had a successful road racing career as competed in the Camel Lights, World Sport Car, Players/GM Series, US Firehawk, Grand-Am Cup, Motorola Cup and Magna Enduro Series, while winning Canadian Road Racer of the Year in 2003 & 2004.

When the NASCAR Canadian Tire Series was known as the CASCAR series, Lapcevich picked up six road course victories.

Keeping him from competiting the full schedule in past years has been the focus he has put on his son Cayden’s career. Since Cayden was a little kid, Jeff has been traveling all over the U.S with him, racing in quarter midget events. Cayden, who is 12 years old now, has been success as he has won multiple championships.

“Cayden never ceases to amaze me,” Jeff says of his son. “He’s always been a really hard racer. I’ve seen him win from the back, win from the front; I’ve seen barrel roll out of the park, land in the hot dog stand and come back and win. He’s relentless, he doesn’t give up. He’s got a huge passion that I’ve never seen anywhere else. He doesn’t like to lose, but he’s just an amazing feel.”

This year, Cayden moved up to the Super Stock division at Sunset International Speedway in Innisfil, Ontario. Cayden marks the youngest competitor to run the division at the age of 12 as most drivers don’t start till they are 14 to 16 years old. This past Saturday, Cayden led 27 laps of the 30 lap feature, before contact with Shawn Chenoworth sent him for a spin.

As Cayden continues to move up the ranks, Lapcevich sees Cayden racing in the NASCAR Canadian Tire Series once he is old enough.

“We’re going to stick it out for a couple more years before Cayden is able to drive here and you’ll probably see a different driver behind the wheel of the car,” he says.

One of the biggest lessons that Jeff has learned behind the wheel and will certainly pass down to Cayden is patience.