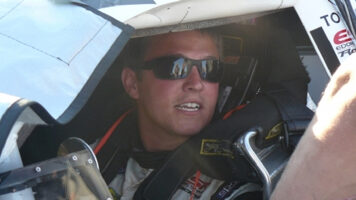 [/media-credit]Concord, NC (May 31, 2012) —NASCAR Nationwide Series driver, Steve Arpin will re-join Venturini Motorsports for three ARCA Racing Series presented by Menards events in 2012. Starting this weekend in the Akona 200 presented by Federated Car Care, Arpin will return to familiar territory as the ARCA series makes its first ever visit to Elko Speedway which is located outside Minneapolis, Minnesota.

“I can’t think of a better place to make my return to the ARCA Series with Venturini than Elko Speedway. This is a special opportunity and moment for me. I’ve received so much support from sponsors and fans up here over the years so it will be awesome to see everyone and get back behind the wheel in the same area where I cut my teeth in racing,” stated Arpin.

The Fort Frances, Ontario native spent much of his early days honing his craft racing dirt modified cars north of the border and in the Minnesota and Wisconsin areas. Located just 6-hours from his hometown, Arpin will have support from Montana based, Loenbro Pipeline Solutions and Rochester, MN based Speed Shop. Arpin is sure to have a huge contingency of fans supporting his return to the ARCA series.

Arpin, who drove full-time for Venturini during the 2010 ARCA season, will make his first series start since Daytona 2011. In 2010, he captured three victories at Salem Speedway, Texas Motor Speedway and DuQuoin State Fairgrounds.

“I can’t thank Billy Venturini and his organization for giving me this opportunity. We’ve had a lot of success together in the past and they’ve played a pivotal role in my career development. They’re clearly the dominant team in the series providing consistent equipment race after race. It’s a great family organization. I can’t wait to get back with all the guys and hopefully reignite our winning ways.”

Arpin ended 2010 with seven top-five and ten top-10 finishes as the fans voted him the Most Popular Driver for the second consecutive year. That same year, Arpin made his NASCAR Nationwide Series (NNS) debut with JR Motorsports at Talladega Superspeedway, where he qualified fourth and finished 26th. He made six more NNS starts, with his best finish of 10th coming at Daytona International Speedway.

In 2011, Arpin signed-on with Turner Motorsports where he drove his No.32 Mikes Hard Lemonade Silverado in the NASCAR Camping World Truck Series, earning his first ever NASCAR pole award at Chicagoland Speedway. In 2012, he’s made two starts for Turner Motorsports in the NASCAR Nationwide Series, finishing 16th at Iowa Speedway and a career best, 10th place finish at Texas Motor Speedway.

The ARCA Racing Series will hold two practices at Elko Speedway on Saturday, from 2-2:45 p.m. and 3:15-4. Menards Pole Qualifying presented by Ansell will follow at 5, and every driver in the starting field will sign autographs for fans on the track from 6:30-7:30.

The 200-lap, Akona 200 will begin at 8pm CST with live coverage from the ARCA Racing Network.

About Venturini Motorsports
Venturini Motorsports (VMS), fielding cars in the ARCA Racing Series, is one of the premier NASCAR driver development programs in the country. The 2012 season marks the teams 30th Anniversary of competition in the ARCA Series. Multiple team championships and consistent on-track success, VMS has evolved into one of the most recognizable names in motorsports.