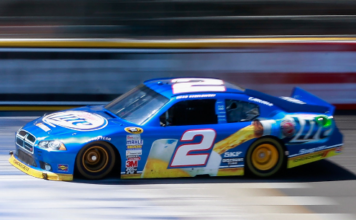 [/media-credit]Just call me a little inquisitive. For years, NASCAR has talked about the 200 mph standard. We’ve heard for years that the “insurance” NASCAR carries would not tolerate anything over the 200 mph limit, and yet speeds reached nearly 220 mph at Michigan this week and lap times at well over 200 mph. What gives?

I mentioned this before without much comment, but the new pavement at Michigan International Speedway has given us speeds we haven’t seen since 1985. Those of us who have been around for awhile remember the runs by Buddy Baker and Bill Elliott that gave us those speeds at Daytona and Talladega in those days and how NASCAR couldn’t tolerate that much speed because of “insurance.” Well, these days it is a completely different story.

In the words of NASCAR official Robin Pemberton, this was not a concern because the speeds would diminish in time. Oh, really? No restrictor plate was needed according to Pemberton because it would get slower and slower as time went on. What happened to the 200 mph limit? Did the insurance companies just waive that or we’re they lying to us?

Way back in the 1980’s, when bobby Allison took out the front stretch catch fence at Talladega, all the talk was about insurance. The insurance people would not allow these races to go beyond that magic number, and now we’re hearing that no one is concerned about it. That’s interesting considering that Michigan, like Daytona and Talladega, are owned by International Speedway Corporation. What makes the difference? Is it the high banks of the other two tracks or is that Michigan is a relatively flat track? Not much information is coming from the folks in Daytona Beach, but it is a question that needs to be asked.

I’d like to hear some explanation. Either it is insurance or something else, but we need to know. I have no problem either way, but it just makes sense that if insurance companies, something I deal with in my everyday life, had a problem with these speeds at the two high-banked tracks, would have a problem at Michigan. Let’s just say that it doesn’t make sense. I love high speeds, but several drivers have expressed a concern. Time for someone to fess up.

Ron Fleshmanhttp://www.ris-news.com
Ron Fleshman has followed NASCAR racing since attending his first race at Martinsville Speedway in 1964. He joined the Motor Sports Forum on the CompuServe network in the 1980s and became a reporter for Racing Information Systems in 1994. In 2002, he was named NASCAR Editor for RIS when it appeared on the World Wide Web as www.motorsportsforum.com. He can now be found at www.ris-news.com. Ron is a member of the American Auto Racing Writers and Broadcasters Association. You can find Ron following and reporting on the top three NASCAR divisions each week. As a lifer in his support of racing, he attends and reports on nearly 30 events a year and as a member of the motor sports media, his passion has been racing for 47 years. He lives with his family in rural West Virginia and works in the insurance industry when not on the road to another track.
Previous article
Kevin Swindell leads practice for RainEater Wiper Blades 200 at Michigan
Next article
Ford Michigan 1 Friday Advance (Matt Kenseth)