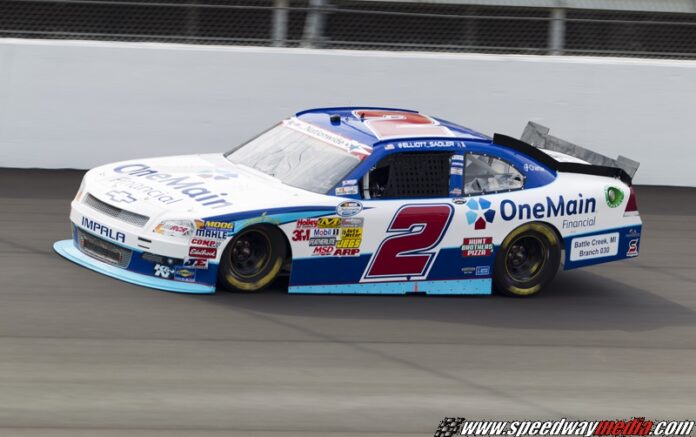 [/media-credit]Coming off three top-10 finishes in the last four races, it’s no secret that Elliott Sadler has high expectations heading into Road America this weekend.

“I really feel like a road course is a place that we can gain some points and get some good finishes,” he says. “I’ve always been pretty good on road courses through my career.”

“Taking the same car back again this year,” he continues. “Feel like I have a lot better knowledge and understanding of what I need as a racecar driver to be fast at Road America. So we’re looking forward to the challenge this weekend, think we can go up there and have a really successful race.”

Sadler says that for his team, it’s all about keeping the same mentality from track to track that evry track on the schedule they can go and win at.

“From the test sessions we had, from the results we had last year on road courses, we have a good attitude on this team,” he says.

Beyond testing, Sadler says that he’s been studying the in-car camera video from last year’s race to get himself mentally prepared.

“Also, my crew chief and I watched it together trying to select gear selections, ratios, rear gears, brakes, different things, saying, I was good here compared to this car in front of me, but maybe I was bad on this side of the track,” Sadler adds. “We try to adjust our car to what we think the track is going to give us on Friday. Just a little different mentality as far as studying the turns, what gear you’re in. It’s almost like studying for an exam going to a road course. That’s the way I approach it. So when I get there, my learning curve is as short as I can make it.”

Sadler made the move from the Sprint Cup Series to the Nationwide Series last year after spending four years in the Sprint Cup Series with no wins, three top fives and 16 top 10s in 144 races. He says now going to the track, knowing he has a chance to win, it’s been a totally different experience these last two years.

“It’s fun showing up to the racetrack and having a bunch of guys around you that believe in you and having a bunch of guys that want to win and want to be there and want to be part of a good race team,” he says. “I think it showed up on the racetrack, in my attitude, and I think it showed up in how fast the cars are each week. We really believe in each other.

“It says a lot for a driver’s confidence when you’re with a secure team, there’s a lot of stability there, you feel like you’re racing week-to-week to get better and better and be part of a championship conversation. It’s a lot more fun on me as a driver than things I went through in the past.”

While some have said moving back down a series is not the best idea, Sadler says that he’s confident in this decision as he wants to be with a competitive team, no matter the series it’s in.

“This is what I want to do,” he says. “If a call comes one day and I’m able to get back in a competitive Cup car and go run, I would love to do that. I’m not going to go to Cup just to say I’m a Cup driver to ride around 25th and 30th and not be a contender. I’m having way too much fun being competitive. This is why I’m do it. I’m a competitive person whether I’m on the racetrack or off the racetrack. I love the situation I’m in right now because of that.”

Between this year and last year in the Nationwide Series with 47 races, Sadler has two wins, 18 top fives and 34 top 10s, along with finishing second in points last year. So far this year, he leads the points, eight points ahead of teammate Austin Dillon.

With having the points lead going into Road America, Sadler says it allows them to be more aggressive since they can take some more chances.

“You can’t be aggressive when you’re so many points down because if you lose more points than that, you dig yourself into a hole,” he says. “The mentality changes it’s based on how much you’re ahead or behind racing for that particular spot.”