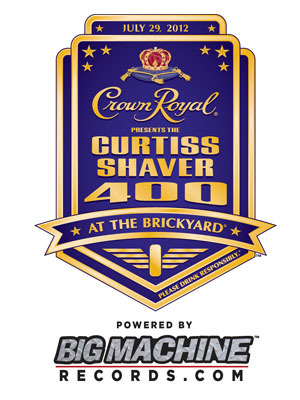 SPEEDWAY, Ind. (July 29, 2012) — Regan Smith’s high point in Sunday’s Brickyard 400 quickly turned into his low point as he saw a potential top-10 or better finish fade into an 18th-place result in one of NASCAR’s crown jewel races.

Enjoying a fast car and running in the top-10 for nearly the first 100 laps of the Sprint Cup race at Indianapolis Motor Speedway, Smith jumped to second place when new crew chief Todd Berrier called for a two-tire pit stop following a caution on Lap 95 of 160.

When the race was restarted on Lap 100, Smith saw an opening and went for the lead. But just as he was ready to pass Brad Keselowski in Turn 2, Smith’s car, which was paying tribute to the victims of the Aurora, Colo. shooting, suffered damage to the left-front fender when it briefly made contact with Keselowski’s No. 2 machine.

“We lost downforce because of the damaged fender and from that point on the car was aerodynamically handicapped,” explained Smith. “It plowed through the corners and it was a handful to drive. But before the incident the Furniture Row/Farm American Chevrolet was awesome. We were running up there with the leaders and it felt great.”

Berrier didn’t question Smith’s move for the lead, but did question his two-tire call.

“Regan did what he was supposed to do — when you have a chance to take the lead you go for it,” said Berrier. “The fender damage hurt, but looking back taking two tires might not have been the best call. It was a gamble and we were being aggressive — we wanted track position and clean air. I feel we got off to a good start this weekend and our plan for the future is simple — to keep on improving and improving. The potential is there.”

The combination of the fender damage and taking two tires instead of four sent Smith all the way back to the mid 20s in track position. In the ensuing pit stops the Furniture Row crew did its best to fix the damage.

With 20 laps remaining and running in 26th place, Smith was tenacious, gaining eight positions by the time he took the checkered flag.

“Definitely disappointed with the result, but real happy with the way the car performed for the first 90 or so laps,” noted Smith.

For Smith and the entire Denver-based Furniture Row Racing team the weekend was emotional with a paint scheme on the No. 78 Chevy honoring those who were killed in the Aurora movie theater and for those who performed heroic acts of bravery.

“To see those 12 names on our car was quite emotional,” said Smith. “They shouldn’t have been on our car. Those 12 people should have been watching the race today or doing something else on a beautiful Sunday afternoon. It hurts and we all deeply mourn this unspeakable tragedy.”

.Smith gained two positions in the point standings — from 26th to 24th.

.There were 17 lead changes among nine drivers.

.There were five cautions for 25 laps.

.Next race is Sunday (Aug. 5) at Pocono Raceway in Long Pond, Pa.