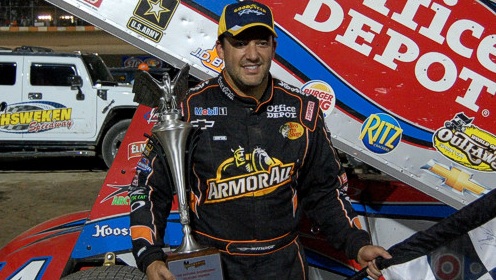 [/media-credit]The day started out rainy and cloudy at Ohsweken Speedway, but the closer race time got the clearer the skies became. Until at the close of the draw for qualifying positions, the skies were clear and the temperature was in the 70’s and the chances of rain had disappeared. There was a promise in the air. An excitement among those who had waited a whole year for these two days. The man who had won his first World of Outlaws race a year ago was back in town. He had come from the back to win the A Main in 360 Sprint Car competition on Monday night. What would tonight hold? Would he take another Outlaw victory and start his path towards another record setting end of the year again? Only the night would tell.

The qualifying process at the  high-banked, 3/8-mile oval brought anticipation. With the cooler temperatures the engines would make more horsepower. More horsepower translates to more speed. But could they use that speed on the 3/8 mile track. The track record of 12.047 seconds was established by Kraig Kinser on July 30, 2010, and early hot lap speeds were way off of that pace. Qualifying speeds would continue to drop as the track became slower as the night progressed. Quick Time was set by Kraig Kinser with a lap of 13.511 seconds or 99.92 mph. Second fast time would go to Tony Stewart who turned a lap of 13.874 seconds  or 97.40 mph with a broken top wing panel. As qualifying progressed times slowed leaving some notable names to the back of the inversion. Names like Sammy Swindell, Joey Saldana, and Cody Darrah.

The heat races were very quick and event free, with the cream rising to the top of the barrell. Heat number one would see Cody Darrah lead all 8 laps to defeat Bill Rose, Lucas Wolfe, Kraig Kinser and track owner Glen Styres. Darrah and Rose would transfer to the Dash as would Kraig Kinser based on his Quick Time of the evening.

The second heat race would be a hard core affair with some of the staunchest racing of the pre main show. Sunday’s winner Donny Schatz would come home ahead of Joey Saldana, James McFadden, Tony Stewart and Chris Steele. Schatz, Saldana and Stewart would advance to the dash. Stewart filling the remaining time spot.

The third heat would see a dominating performance by Sammy Swindell as he held off Chad Kemenah, Kerry Madsen, Dustin Daggett, Michael Parent. Swindell and Kemenah would advance to the Dash.

The final heat would see first surprise of the evening. Jessica Zemken held off a hard charging Craig Dollansky for the victory. Dollansky would hold off a strong side by side challenge from 20 time World of Outlaw Champion Steve Kinser and Tom Huppenen would hold off Shane Ross for the final A Main transfer spot. Zemken and Dollansky would finish out the Dash field.

The Last Chance Showdown saw a field of local competitors putting on a whale of a show for the final four A Main positions. The race was won by Jamie Collard with Travis Cunningham, Keith Dempster and Dain Naida following him to the A Main.

The big show was set to go. The 30 laps $10,000 to win A Main came out of the gate like the thoroughbreds that were running it. Tony Stewart would take the lead into one and set sail. Dollansky would close to within a car length in traffic but Stewart would pull away. Stewart ran the thin cushion in 3 and 4. and the middle of the track in 1 and 2. On lap 5 Stewart would have a close call with a lap car and have to jump on the binders nearly hitting it from behind. Dollansky closed right on his rear bumper but Stewart pulled him down the front stretch and again stretched his lead to over a second. All the 2 while with Donny Schatz was challenging for the 2nd spot. In Schatz’s  mirror was team mate Steve Kinser who would go three wide for third with Kraig Kinser and Schatz with The King of the Outlaws coming out on the top. When the white flag waved Stewart was safely a half a second in front of Craig Dollansky but Steve Kinser was right there to challenge for 2nd. When the checkers waved and the dust settled it would be Dollansky coming home in second place with Steve Kinser, Kraig Kinser and Donny Schatz the top 5.

This was Stewart’s 3rd sprint car win in as many races and his second of the week. It was also the second year in a row that Stewart had claimed the World of Outlaws race at Ohsweken. His victory last year he credited for propelling him to his 3rd Sprint Cup Championship. If that is the case his competition in the asphalt series best be putting on their big boy pants cause Smoke is coming.

Today, was full of difficulties for the World of Outlaws staff. The broadcast equipment wouldn’t broadcast so the fans were without the voice of one of the best broadcasters in the business Johnny Gibson. They worked tirelessly to get the broadcast going in time for the A Main. It showed a lot. It showed a lot about the staff of the Outlaws and their commitment to the people that they entertain and call fans and friends. It said a lot about their dedication to the sport and the jobs they do. But what spoke the loudest was the silence. Without the voice of Johnny Gibson and just the timing and scoring loop the competition was just numbers. It became black and white and a life very different than what the public is use to. It became obvious that the old saying of you don’t know what you have until it’s gone is true. And without Johnny Gibson the Outlaws were missing a star competitor. A man who races every lap from the booth just like drivers do in the cars. A man whose dedication to the sport and the drivers is second to none. A man’s whose talents and gifts light up all of our lives every race.

It was not much different than the way a young man started a long time ago in Indiana. Not much money but a whole lot of talent and desire. He worked his way into people’s hearts he gained their respect and he took their breath away. That young man went on to accomplish big things, an Indy car championship, 3 Nascar Championships, USAC Silver crown championships. But as one sits at the dirt track having watched him work his magic and display his skills, it becomes painfully obvious that the world of dirt didn’t know what it had until it was gone. Thankfully, Tony Stewart will always call the dirt home, and so far he has continued to find ways to come back and visit.