The Final Word – Watkins Glen is next, with Gordon back in the mix 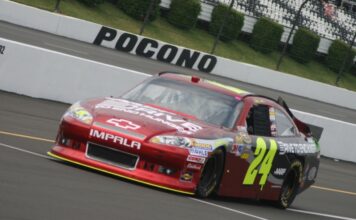 [/media-credit]Finally, one name has been missing from the list of those who appeared to be in contention for the 2012 NASCAR Spring Cup title. Now, all is right with the world.  After winning in Pocono on Sunday, Jeff Gordon is back. When Jimmie Johnson went for a wiggle, he took himself out of the hunt for the day, ditto for Matt Kenseth, and any thoughts Denny Hamlin might have retained got smashed. However, it allowed Gordon to squirt through on the inside with Kasey Kahne behind him. The caution came out, the thunder boomers returned, and the race ended.

For Gordon, it was the 86th win of his career, his 6th at Pocono, and first of the season. Saturday he celebrated his 41st birthday, crew chief Alan Gustafson got his 37th birthday gift Sunday, and Gordon fans this weekend got what they wanted. At a time when wins, and nothing but wins, is meaningful, the former four-time champion got his win, vaulting him into a points tie with Ryan Newman, who finished sixth, and a dozen up on Kyle Busch among the contenders for the second wildcard spot.

Busch had a brake breakdown, sending him into the wall and leaving him 33rd on the day. Kahne retained his hold on the first wildcard spot, with his two wins and 11th placing on the ladder. Carl Edwards is just three points back of Kahne and eight ahead of Gordon and Newman, but remains winless. Seventh on Sunday was nice, but without a victory it is meaningless. Joey Logano has one, but he pretty much needs another in the next five events or it is probably over for him.

Dale Earnhardt Jr not only has his win, but remains first in the standings despite transmission problems that left him back in 32nd place, with Kenseth, Greg Biffle, and Johnson all within ten points of him. Still, those in the top ten will stay there, with only the hunt for wins and the bonus points they deliver of any importance.

Who will win at Watkins Glen on Sunday? Gordon has four there, though the last was in 2001. Kyle Busch claimed one in 2008. Tony Stewart has three wins this season, tying him with Brad Keselowski, and five wins at the Glen, the last one in 2009.

He and the rest of the top ten are safe, Kahne is safe for at least another week and with a win he could be pretty much a lock for a wildcard berth. Edwards needs a win to take advantage of his points total, while Gordon, Newman, Busch and Logano would boost their shot by a visit to Victory Circle. Oh, we can’t forget that a win by Paul Menard would make things even more interesting.

Please don’t forget those who got caught up in the storm in the Pocono Raceway parking lot, the victims of a lightening strike. At least one fan lost his life, others were injured, and we are reminded about those things which are truly important. Give your loved ones a hug this week.

Ron Thornton
A former radio and television broadcaster, newspaper columnist, Little League baseball coach, Ron Thornton has been following NASCAR on this site since 2004. While his focus may have changed over recent years, he continues to make periodic appearances only when he has something to say. That makes him a rather unique journalist.
Previous articleDecision at Pocono Puzzling
Next articleEdwards Ready to Hit the Road at Watkins Glen