The Chase Is Set, But Make No Mistake, Gordon Is In! 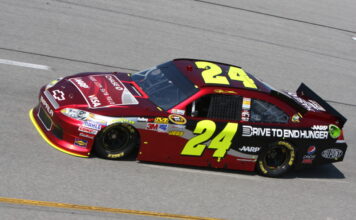 [/media-credit]It was misery. I wish I could have been at Richmond sitting in the stands without all the commentary provided by ESPN last night. Clint Bowyer won the race, but it was almost an afterthought to Bestwick, Jarrett, and Petree. All attention was on Kyle Busch and Jeff Gordon, the two drivers who would finish 12th (yes, I said 12th) in the standings that lead to NASCAR’s playoff, The Chase. It was an amazing turn of events and Gordon deserves most of the credit, but there were 41 other drivers out there and one (Bowyer) was making a statement for Michael Waltrip Racing that was just as amazing. Drama, yes, but truth be told, Gordon has little chance at a championship given his team’s record in 2012.

I know the argument. Tony Stewart did it last year. So did the NFL’s NY Giants and baseball’s St. Louis Cardinals, but this is not football or basketball and there are a lot of good teams in the final 12 that won’t be sitting down and doing nothing these last 10 races. Is it possible? Yes. Is it probable? No. Gordon has one win this season and that came when his teammate and Matt Kenseth decided to drive too hard and the rains came. I am looking forward to the mustache coming back on Jeff, though. Reminds me of the time we chatted at Myrtle Beach Speedway back when he was running the No. 1 Ford sponsored by Baby Ruth candy bars. Nice kid then and nice man now, so he was not the problem last night. The race telecast, however, was.

Let’s look at the Chase competitors and see who just might have the upper hand.

For those who care, the field is made up of six Chevrolet’s, three Toyota’s, two Fords, and one Dodge. Combined, the drivers participating in The Chase have 13 Sprint Cup championships, though nine of those belong to two drivers – Gordon and Johnson.

Ron Fleshmanhttp://www.ris-news.com
Ron Fleshman has followed NASCAR racing since attending his first race at Martinsville Speedway in 1964. He joined the Motor Sports Forum on the CompuServe network in the 1980s and became a reporter for Racing Information Systems in 1994. In 2002, he was named NASCAR Editor for RIS when it appeared on the World Wide Web as www.motorsportsforum.com. He can now be found at www.ris-news.com. Ron is a member of the American Auto Racing Writers and Broadcasters Association. You can find Ron following and reporting on the top three NASCAR divisions each week. As a lifer in his support of racing, he attends and reports on nearly 30 events a year and as a member of the motor sports media, his passion has been racing for 47 years. He lives with his family in rural West Virginia and works in the insurance industry when not on the road to another track.
Previous article
RCR Post Race Report – NSCS Federated Auto Parts 400 at Richmond Int’l Raceway
Next article
2012 Chase Forecast, Top 12 Begin Cup Run at Chicago