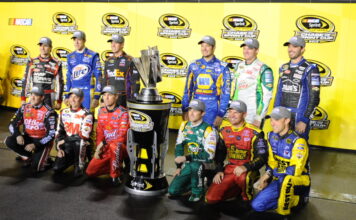 [/media-credit]The 2012 Chase for the Sprint Cup begins next weekend at Chicagoland Speedway. Here is a look at one of the deepest chase fields in history.

1. Denny Hamlin – 2012 has been a bounce back year for Denny. A series leading 4 wins has Hamlin sitting in the top spot as the chase begins. Darian Grubb has been a big factor in the 11 team’s resurgence.

Outlook: Denny should be a factor all the way to Homestead. New Hampshire,Martinsville, and Phoenix are tracks that Denny should contend for wins at. Very strong on the 1.5 mile tracks as well.

Outlook: The chase sets up perfectly for Johnson. Very strong on the 1.5 mile tracks where he has the most career wins all time. Also a brilliant track record at Phoenix and Martinsville. Only concern for the 48 team could be Talladega.

3. Brad Keselowski – 3 wins in the 2012 season and very consistent across all the tracks in the chase. Brad should show to be a major contender all the way to Homestead.

Outlook: Brad will need to come up big on the 1.5 mile tracks where he has scored 2 wins in his career also will need to have great showings at Loudon and Martinsville.

4. Tony Stewart – The defending champion rolls into the chase with 3 wins. But inconsistent finishes left Smoke scrambling to protect his bonus points heading into the chase.

Outlook: Can Smoke put together another magical run like he did in 2011? Time will tell but the first three races will be the deciding factor on whether Smoke is a contender all the way to Homestead.

5. Greg Biffle – The Biff is back in 2012. 2 race wins and has led the points for a good portion of 2012. Biffle looks primed to become NASCAR’s first triple crown winner.

Outlook: Biffle will be strong on the 1.5 mile tracks as well as Talladega. The short tracks will determine Biffle’s chase fate. Top 10’s at Martinsville and Phoenix could be big for Biffle’s title hopes.

6. Clint Bowyer – One of the chase’s best stories in 2012. 2 wins and several strong finishes have the 15 team primed to make some noise in the chase.

Outlook: The short tracks will play to Bowyer’s strength. New Hampshire and Phoenix figure to be great races for Clint. Also been solid on the 1.5 mile tracks and is a great plate racer. Looking for a championship dark horse look no further than Clint Bowyer.

7. Matt Kenseth – Another year, the same old rock solid Matt Kenseth. 1 win and in the Top 5 in points basically all of 2012. Can Matt show the same rock solid consistency that led him to the 2003 title.

Outlook: Terrific on the 1.5 mile race tracks as well as Talladega. Martinsville and New Hampshire will be big for the #17 team and their cup hopes.

8. Dale Earnhardt Jr. – The sport’s most popular driver has given Junior Nation a ton to cheer about this year. 1 win and in the Top 5 in points all of 2012. Junior is showing the consistency that could lead him to his first cup series title.

Outlook: Junior is proving to be consistent and has run great at every track in the chase. Needs to pick up a couple of wins and keep that consistency in order to remain a contender.

9. Kasey Kahne – After a rough start to the 2012 season, Kahne has finally found his stride in that #5 HMS Chevrolet. Picked up 2 wins at New Hampshire and Charlotte.

Outlook: Kasey’s strength is the 1.5 mile race tracks. Will need to improve on his short track program to remain a contender. Talladega also proves to be a critical race for Kahne.

10. Kevin Harvick – Hasn’t been the most consistent of seasons for Harvick but did enough when it mattered to make the chase field. Showed strength at Atlanta leading the most laps and finishing 5th.

Outlook: Could Harvick be this year’s Tony Stewart? The answer remains to be seen but has won at 6 of the 10 chase tracks and is very strong on the short tracks and at Talladega.

11. Martin Truex Jr. – Another feel good story for Michael Waltrip Racing. Has flexed his muscles on the 1.5 mile race tracks this season and almost scored victories at Kansas and Atlanta.

12. Jeff Gordon – The 4 time champion has battled against all odds and extremely bad luck to make this chase field in 2012. Picked up a win at Pocono and rode a string of Top 5 finishes to put himself in the chase.

Outlook: Jeff doesn’t have a weak track in the chase. Has won at every track in the chase with the exception of Homestead. Needs a good start as well as a couple of wins to keep pace with Johnson,Hamlin, and others.

Prediction: It is hard to ignore Jimmie Johnson as the odds on favorite to win this championship. 5 consecutive titles as well as making the chase every year of its existence are key factors for the 48 team. But this chase field is extremely deep and in my opinion the best in the 9 year history of the chase. Anyone of these 12 drivers can win this championship. You have proven champions such as Johnson,Stewart,Kenseth, and Gordon. Hungry drivers such as Hamlin,Keselowski, Bowyer,Kahne, and Biffle. Drivers like Truex and Harvick who have flown under the radar most of the year. Then you have the crowd favorite Dale Earnhardt Jr. who is seeking his first championship. This chase field is stacked from top to bottom. Whoever walks away with the championship after Homestead will have truly earned it but we have to start at Chicago on Sunday to see who will be there at the end. This should be an incredible 10 weeks for NASCAR and its fans.

SM Staff
Previous articleThe Chase Is Set, But Make No Mistake, Gordon Is In!
Next articleQuick reaction: Chase for the Sprint Cup gets ready to go green