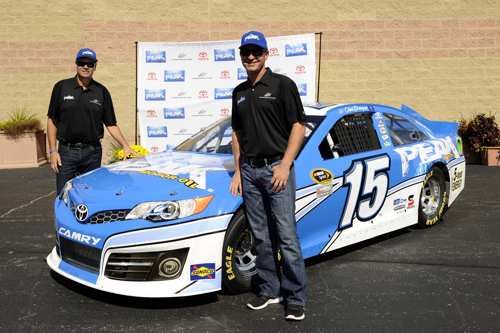 WILL SERVE AS PRIMARY SPONSOR FOR THREE RACES WITH MWR

CHICAGO – (Sept. 14, 2012) – Michael Waltrip Racing announced Friday that PEAK Motor Oil will become a primary sponsor on Clint Bowyer’s No. 15 Toyota for three races in each of the next three NASCAR Sprint Cup seasons.

MWR will also feature PEAK Motor Oil as an associate sponsor on the No. 56 NAPA AUTO PARTS TOYOTA and the No. 55 Aaron’s Dream Machine driven by Mark Martin, Brian Vickers and Waltrip.

The familiar PEAK logos will adorn Bowyer’s hood at the May Talladega race, the July Daytona race and at Chicagoland in 2013. Bowyer won last weekend’s race at Richmond, his second victory in 2012, and enters this weekend’s Chase for the Sprint Cup tied for fifth.

“This sponsorship is really cool for me and right in my sweet spot,” said Bowyer. “PEAK stepping back into Sprint Cup Racing is not only good for us at Michael Waltrip Racing, but a real tribute to their heritage as well as NASCAR and its fans. They have a lot of cool things planned for the upcoming season that race fans will enjoy.”

PEAK Motor Oil is a product in the portfolio of Old World Industries LLC., a company specializing in antifreeze manufacturing and marketing. PEAK isn’t a stranger to race fans.

PEAK has a deep heritage in the world of motorsports, with involvement ranging from NASCAR, NHRA, IndyCar, Supercross, and Monster Jam. PEAK offers a wide array of Antifreeze products that feature patented, advanced technologies allowing for superior protection for all vehicles, both on pavement and off-road. PEAK held race entitlements in NASCAR and IndyCar races throughout the 1990’s and 2000’s, and was an early supporter of NASCAR legends Dale Earnhardt and Kyle Petty.

“We are thankful to have a partner like PEAK join the MWR family,” said Waltrip, founder and co-owner of MWR. “I remember when Dale Earnhardt was riding with PEAK and watching Kyle Petty win at Rockingham in 1990 with PEAK for Felix Sabates’ team. So, it’s cool now that they are with us. Pairing PEAK and 5-hour ENERGY on the No. 15 with Clint gives us as solid of a driver-sponsor combination as there is in the NASCAR garage.”

Waltrip said there are primary sponsorship opportunities open on the No. 15 in 2013.

“5-hour ENERGY and PEAK are wonderful, powerful retail brands activating with this race team. We still have some work to do to fill out the 2013 schedule and need to bring some more partners to add to this great foundation of support,” said Waltrip.

“This team is hot right now and Clint Bowyer is one of the top personalities in NASCAR. So, I hope we can continue to fill these open races in 2013.”

Old World Industries, LLC, headquartered outside of Chicago in Northbrook, Ill., was founded more than 30 years ago by Tom Hurvis and Riaz Waraich. Today, Old World Industries conducts business in more than 52 countries around the globe as a symbol of growth and success. Peak Performance Products provides a variety of consumer products for automotive enthusiasts. For more information, please visit www.peakauto.com.