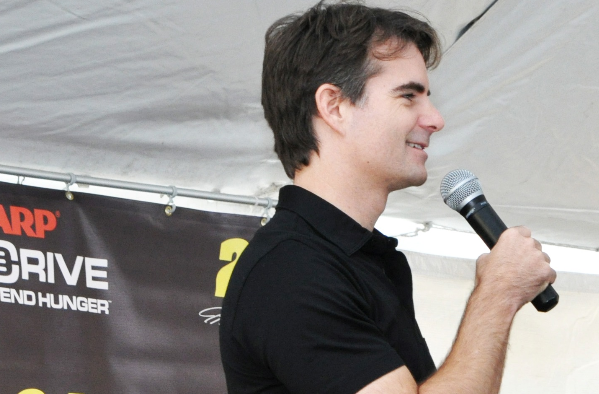 [/media-credit]As part of his continuing efforts to not only call attention to the issue of senior hunger but also to do something about it, Jeff Gordon teamed up with Chase Card Services and the AARP Foundation to pack 400 meal boxes for the Food Bank of Delaware this past race weekend.

The boxes that were packed by hundreds of fans of the No. 24 Drive to End Hunger Chevrolet held over 4,800 meals that the Food Bank delivered to needy seniors in the area who would no longer have to choose between food and their medicines or paying their rent.

The fans who packed boxes in the Dover International Speedway on race morning were rewarded with a meet and greet with their favorite driver prior to his running of the AAA 400 at the Monster Mile. Jeff Gordon finished second in the race, keeping his hopes alive for the Chase.

“We’re excited to be a part of this food packing event for the Food Bank of Delaware,” Michael Rittler, General Manager of Affinity and Retail Credit Cards for Chase Card Services, said. “Partnering with Jeff Gordon, the four-time Cup champion, and the Drive to End Hunger AARP initiative, we are thrilled to be a part of it.”

“Hunger among older Americans is a huge issue so we’re packing 12,000 pounds of food to be distributed to thousands of seniors,” Rittler continued. “Chase has been partners with AARP for close to 20 years.”

“Partnering with Jeff Gordon and the NASCAR fans was a great fit for what we are about.” [/media-credit]Chase not only jumped aboard, along with the AARP Foundation, as a sponsor of the No. 24 car, but they also put their money in the game, donating $0.03 to the AARP Foundation Drive to End Hunger for every new credit card account opened through this year.

Chase even doubled that donation throughout the month of September as part of Hunger Action Month.

“We’re excited that every transaction, up to $2 million, will help end senior hunger,” Rittler said. “We raised $2 million last year and it looks good again for that amount or more this year.”

“This is just a great event and we’re proud that so much food will be packed to help local seniors.”

Patricia Beebe, President and CEO of the Food Bank of  Delaware, was overwhelmed by Chase’s commitment to the effort and also by the generosity of the NASCAR fans in taking time during their pre-race activities to help others.

“What we’re doing here today is putting together a meal box for seniors,” Beebe said. “These volunteers have made these boxes, which, sometimes takes us hours of volunteer time and effort, so this is such a huge help.”

“To be able to make so many of the boxes and to inform the community about hunger is a very good event.”

Beebe shared that 1 in 20 seniors in Delaware are hungry and she thinks that number may be an underestimate, as many seniors in need go undetected.

“That’s why this event is also critical because a lot of times seniors don’t feel like there is anything for them,” Beebe said. “That’s why events like this show them that there is help for them.”

“This is a great way to reach so many people.”

Both Rittler and Beebe acknowledged that having someone of the caliber of Jeff Gordon involved in their efforts to end senior hunger was priceless.

“Jeff Gordon has name recognition and is someone people look up to and want to listen to,” Beebe said. “People come in droves to talk to him.”

“I had a chance to talk to him and he knows what’s he’s talking about and he believes in this cause.”

“We’ve had the opportunity to talk to Jeff about the issue of hunger,” Rittler said. “It’s not just a sponsorship for him.”

“It’s in his heart and we’re proud to be a part of that,” Rittler continued. “Before we were ever involved in this, I was a Jeff Gordon fan and now I am even more so.”

As the fans cheered for Gordon after the food packing was finished, Gordon stopped them quickly and recognized them for all of their efforts with the meal packing. He also acknowledged one particular young fan who arrived at the speedway at 5:15 am just to lend a hand to the effort.

““I should be thanking all of you for your help,” Gordon told the hundreds of fans gathered to meet him. “So many people are going to benefit and that was a great way to get the race day started.”

“I think cause-related marketing is the way of the future,” Gordon continued, referencing the Chase fundraising effort. “You folks that care about others, especially with hunger issues, and for Chase to step up, is really what’s going to take this effort to the next level.”

Gordon acknowledged that he was not only a supporter of the Chase credit card, but he and his wife Ingrid use it regularly, especially with two young, growing children, daughter Ella and son Leo.

“I’m proud to use the credit card all the time, knowing that a portion of the purchase goes to Drive to End Hunger,” Gordon said. “I think I’m one of AARP’s biggest supporters with that credit card because me and my wife make quite a few purchases, especially having two children.”

“There are a lot of great causes out there and I’m proud to be a part of this one.”