Kenseth scores the win at Talladega in wild finish 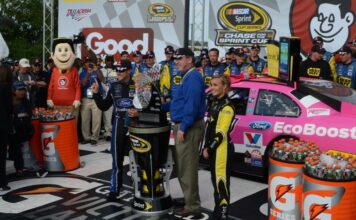 [/media-credit]Matt Kenseth scores a much needed victory in the Good Sam’s Roadside Assistance 500 by avoiding a last lap crash triggered by contact between Tony Stewart and Micheal Waltrip.

After a clean and calm race, but the “big one” finally came on the final turn of the final lap. In an interview immediately following the race, Stewart took full responsibility for the crash saying he came down on Waltrip trying to protect his position.

“I just looked in my mirror and saw them coming at me three-wide. I kind of let Tony have his spot there. It didn’t look like he had a big push behind him and lined up with Kevin and we pretty much stayed locked together there until we got to turn three and I thought it was gonna be a drag race to the finish. I didn’t know what was gonna happen and I’m still not sure what happened. Somehow I think Tony got turned and caused a big wreck.” Kenseth said.

Waltrip, however, says “I don’t blame Tony at all.” going on to say anyone else leading would have done the same thing.

“I just screwed up. I turned down and cut across Michael and crashed the whole field. It was my fault, blocking and trying to stay where I was at.” Stewart said.

Kenseth and his Roush-Fenway Racing teammate Greg Biffle ran strong for most of the day.with Kenseth leading three times for a total of 33 laps. After a a poor start in the Chase, this strong run was just what they needed to regain some momentum for the remainder of the Chase. The downside for the No.17 team is that points leader Brad Keselowski finished a solid seventh and only lost ten points to the winner Kenseth leaving a distant 62 points back.

Jeff Gordon also made it through the carnage unscathed giving him three top three finishes out of four Chase races, but he too only gained five points on the leader Keselowski, he did however gain four spots in the standings.

A long list of Chase contenders including Jimmie Johnson, Clint Bowyer, Tony Stewart and Dale Earnhardt Jr were all involved in the last lap crash and took hits in the points.

“If this was what we did every week, I wouldn’t be doing it. I’ll just put it to you that way. If this was how we raced every week, I’d find another job. That’s what the package is doing. It’s really not racing. It’s a little disappointing. It cost a lot of money right there.” Earnhardt Jr. said.

Keselowski now has a solid 14 point lead over Johnson and six more back to Hamlin. They have now separated themselves from the rest of the Chase drivers, and seemingly will be the three that contend for the 2012 title.

Roger Holtsclawhttp://www.nationalmotorsportsnetwork.com
Roger has over 24 years experience as a mechanic and crew member in NASCAR at many levels including Cup, Nationwide and Truck Series. He has also competed as a driver at many short tracks around the Southeast including one start the USAR Hooter's Pro Cup Series. Roger is now embarking on a motorsports journalism and photography career and is co-owner of HMP Photo. Follow me on Twitter @rogerholtsclaw Email me: roger@speedwaymedia.com
Previous articleFord Racing NSCS Notes & Quotes – Kenseth Wins Talladega
Next articleCHEVY NSCS AT TALLADEGA TWO: Post Race Notes and Quotes